Two years ago, Nokia returned to the smartphone segment with Android One and solid specs. However, even though the company was unable to license smartphones until 2017 is has never lost faith in the feature phones. After HMD Global took ownership of Nokia branded handsets, they have made efforts to upgrade feature phones. We saw them raising from 2G EDGE connectivity to a further improved 4G. The Classic Nokia 3310 4G was one of the first feature phones launched and became a hit. Now, after a quiet period, Nokia is gearing to launch a new feature phone dubbed Nokia 400 4G. Besides the 4G connectivity and upgraded hardware, it is expected to debut with Google’s GAFP OS, a software specially made for feature phones. 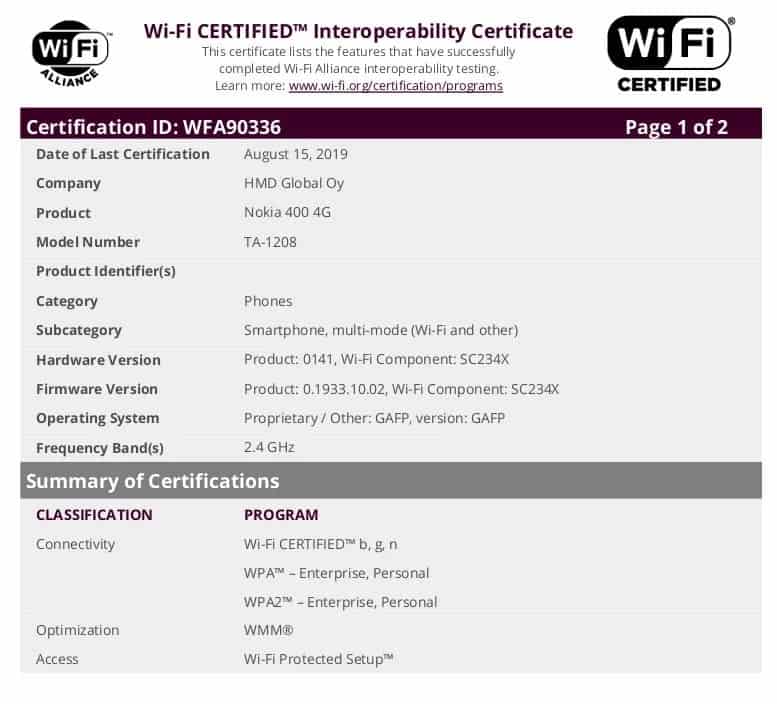 The smartphone boasts a TA-1208 model number and recently got Bluetooth Certifications as well as Wi-Fi Alliance approval. The certification document reveals some key details about the handset. It will feature Bluetooth 4.2 and have support for LTE. Under the hood, the Unisoc processor will run the show and it has Wi-Fi thanks to SC234X component.

Worth noting that the handset will be running Google’s GAFP OS. It is an Android OS branch made specifically for feature smartphones. The video surfaced last year which shows a Nokia feature phone working on Android 8.1. The smartphone was listed with Google’s new feature phone OS, however, there has been no sign since then that the company will actually venture in that direction.

Meanwhile, the Nokia 400 4G was certified at India’s BIS. It is a good hint that the new feature phone will also debut in the world’s second smartphone market. We believe that more information about this handset will surface in the coming days. After all, it has received some of the key certifications that are necessary for launch. It hints at an imminent launch, but we have to wait for confirmation.