Motorola is gearing up to unveil a set of new smartphones during MWC 2020. The Lenovo-owned firm will release at least three new mid-range smartphones in the form of Moto G Stylus, Moto G8 and Moto G8 Power. The latter has been spotted in the GeekBench database. It basically confirms the chipset inside as well as the amount of RAM and the OS version. 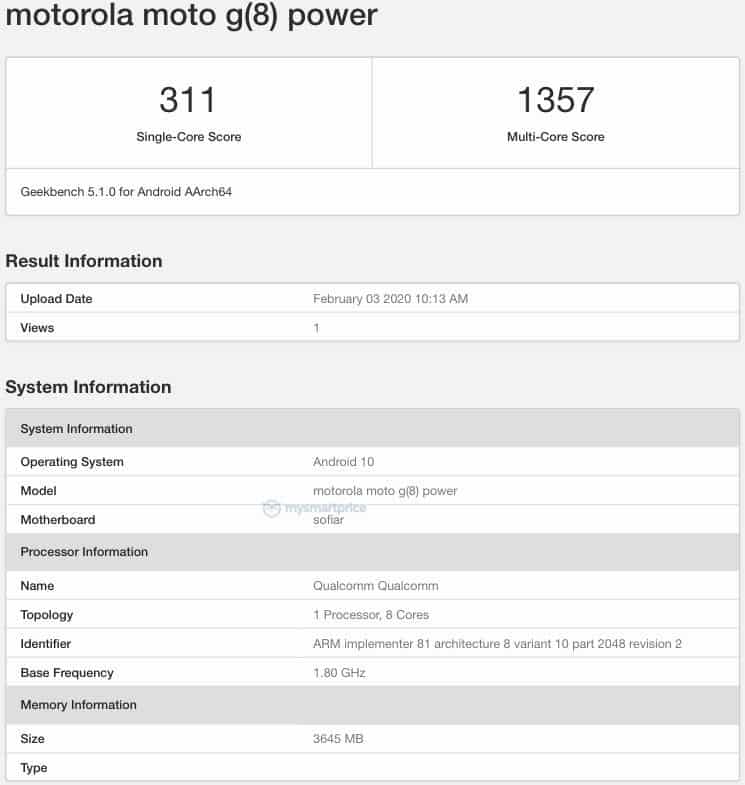 The Moto G8 Power passed through GeekBench with a 1.80GHz Octa-Core chipset. Thus achieving a score of 311 in Single-Core tasks and 1,357 on Multi-Core. The specs along with the score amount are on par with the ones achieved by Snapdragon 665-powered devices. This leaves us with no doubt that the mid-range SoC is making a comeback in this Motorola’s smartphone.

Along with the processing power, the smartphone will boast 4GB of RAM. This should be enough for multi-tasking purposes and it’s on par with most mid-ranges. We can’t say right now if Motorola will provide another variant with 6GB of RAM in the future. The benchmark listing also confirms that the device will come with vanilla Android 10 straight out of the box. It has just a few of Motorola’s specific modifications.

According to reports, the Moto G8 Power will pack a 5,000mAh battery with 18W fast-charging support. Furthermore, the specs will be built around a 6.36-inch FullHD+ display with a punch-hole for the 25MP selfie snapper. On the rear, we expect a Quad-Camera setup lead by a 48MP main shooter.

For now, that is everything we know about the Moto G8 Power. However, considering that its launch will happen late this month, we believe that the upcoming days will be flooded with leaks about Motorola’s upcoming series. So stay tuned.

Next Samsung Galaxy Home Mini will be launched on February 12