Chinese manufacturing giant, Xiaomi, will unveil its latest flagship series Xiaomi Mi 10 next week. According to the company, this smartphone will touch down on a live online broadcast at 14 o’clock on February 13th. Now, Xiaomi Jingdong flagship store has opened an appointment for Xiaomi Mi 10. According to Jingdong’s appointment information, this device will be available for sale at 18:00 on February 13.

JD.com’s phone specifications and packaging page also reveal some information of this device. According to the appointment page, the Mi 10 dimension is 157.21 mm x 74.64 mm x 8.54 mm. It’s 196g in weight. This listing also shows that Jingdong will be selling the 5G version of this phone. In addition to the Chinese press conference, Xiaomi will also hold an MWC conference on February 23. MWC2020 will hold in Barcelona, ​​Spain, and the company will release the Mi 10 for the European market. 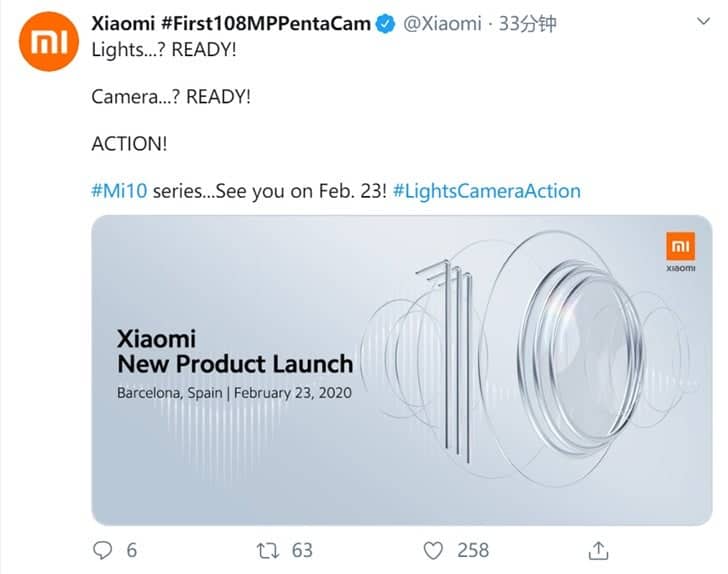 This Xiaomi Mi 10 will use the Snapdragon 865 5G chip, and the memory will also be upgraded to LPDDR5 memory. Its main camera will be Samsung’s 108MP CMOS sensor. Samsung also stated on its official Weibo that Samsung ISOCELL is waiting to see Xiaomi’s flagship new product photography performance. In addition, it expects that the new product will once again break through the mobile phone image limit. This points in a new direction for image development in 2020.

While we expect a 90Hz Samsung curved screen, UFS3, Snapdragon 865, LPDDR5.0 as well as 5G network on this smartphone, it will not be cheap. According to Xiaomi’s CEO, Lei Jun, the Xiaomi Mi 10 series focuses on quality rather than price.

How much do you think the Xiaomi Mi 10 series will cost? Will you get this device if it prices similarly as Apple or Samsung flagships? Let us have your thoughts in the comments