OnePlus is gearing up to unveil the next OnePlus 8 and 8 Pro sometime in the first half of 2020. Judging by the number of leaks and reports surfacing everywhere we can pretty much say that they are coming fast. According to the latest industry insider info, we can expect to see the pair arriving sometime in late March or in April. In other words, OnePlus will wait until MWC cools down before unveiling its newest smartphone duo. Today, a fresh new leak claims to have a render of the upcoming OnePlus 8 Pro, along with a few specs. Some of these are pretty obvious, while others are rather interesting. 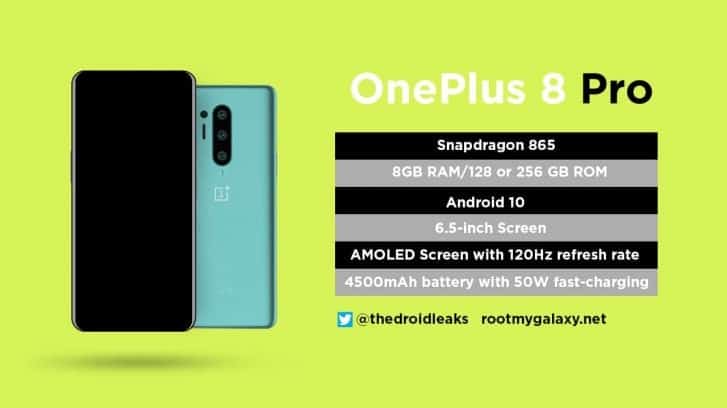 It’s interesting to point out that this leak actually matches an earlier set of renders from a different source. However, this time, we have a different color. We can’t say that the creator of this render actually had some “official” render to base its work, if not, we can say that he did his homework by making something that is quite accurate with previous leaks. The render reveals the 3D ToF and supporting camera sensors in a little strip to the left of the main triple camera array.

Moving on to the specs sheet, we have the fairly obvious Snapdragon 865 and Android 10. It also completes the package with 8GB of RAM and 128GB or 256GB of RAM. Although 12GB of RAM option isn’t described here, we believe that it will eventually come. OnePlus could even make the jump on the increasingly popular train of showing-off with a 16GB variant. This sounds perfectly aligned with a future McLaren edition.

Things become more interesting in the display department which reveals a 6.5-inch AMOLED Display. Worth noting that the previous leaks were pointing at 6.65-inch for the Pro model and 6.5-inch for the vanilla OnePlus 8. However, these rumors are quite old now and only pointed a 90Hz display in the upcoming flagships. The new source determines that the OnePlus 8 Pro will boast a display with a 120Hz refresh rate. That is something that the company’s own CEO, Pete Lau, already confirmed.

Last but not least we have a rather large 4,500mAh battery alongside 50W fast-charging. Presumably Warp Charge 50, if current branding is used. The first time we saw this technology was all the way back in 2018 on the Oppo Find X Lamborghini. And, more recently, the Realme X2. The leak seems to be quite accurate in most parts, but we still recommend you to digest it with a pinch or two of salt.

Next Honor 30 Series Coming in April, According to Huawei Leakster