Yesterday, NVIDIA officially released the MX 350 GPU and this is an entry-level mobile graphics card for laptops. According to the company, the performance is 2.5 times Intel’s 10th generation Ice Lake i7-1065G7 core display. The official also said that the new graphics card can achieve faster photo editing, video editing, and better gaming performance. Furthermore, this card combines NVIDIA Optimus technology to provide the perfect balance between battery life and performance. 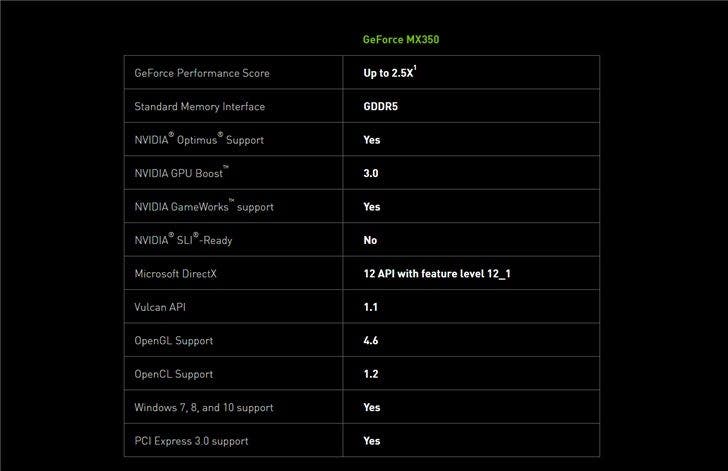 In addition to the MX 350, Nvidia also announced the MX 330, which has twice the performance of the i7-1065G7 core display. Yesterday, Lenovo announced that the Xiaoxin Air 14 2020 will use the Nvidia MX 350 alone. The company also released a test result of the Nvidia MX 350. On the 3DMark running points, this graphics card scores 16.7% and 16% (for Fire Strike test and Time Spy test respectively) performance improvement over the previous generation GeForce MX 250.

The GeForce MX350 also a graphics chip built on the 14 nm process. This chip based on the GP107 graphics processor and supports DirectX 12.0. The design of this chip ensures that all new games will run on GeForce MX350.
The GP107 is not a large chip, it has a die area of 132 mm² and comes with 3.3 million transistors. On this new card, Nvidia cut short the number of units so that it will reach the product’s target shader count. It comes with 640 shading units, 32 texture mapping units, and 16 ROPs. Furthermore, Nvidia uses a 64-bit memory interface to connect 2,048 MB GDDR5 memory on the GeForce MX350. The GPU is operating at a frequency of 1354 MHz, which can rise up to 1468 MHz while the memory runs at 1752 MHz. It has a 20W maximum power draw.
Nvidia MX 350 does not connect directly to monitors thus there is no display connectivity. However, it is mainly used for laptops thus it will use the output of the host device. GeForce MX350 can connect to the rest of the system using a PCI-Express 3.0 x16 interface.
Source/VIA :
ITHome