Huawei sub-brand Honor is all set to launch two new smartphones namely Honor 9X Pro and Honor V30 on February 25 for the global market. It seems like the company is working on yet another budget device. This time we’re looking at Honor 9C. As the name suggests, Honor 9C is going to be the successor of previously launched Honor 8C. The device has recently made an appearance on the EEC certification website and here is everything you need to know about it. 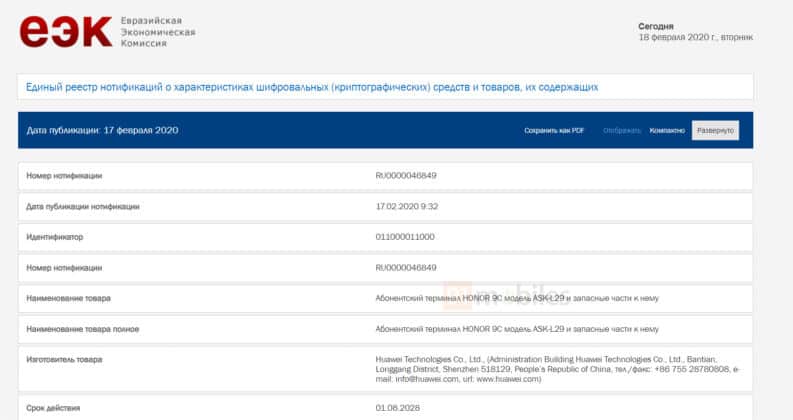 This report comes courtesy of 91Mobiles. As per the listing, the upcoming smartphone comes with the model number ASK-L29. The smartphone has got the certification on February 17th. Sadly, the listing does not talk about anything else related to the smartphone. Other than confirming the moniker, the internal hardware of Honor 9C remains unknown as of now. With that said, it should be a solid upgrade over its predecessor. We might see powerful chipset, better battery life, and improved cameras.

Since the smartphone has now made its way to the EEC certification listing, we might see it getting official soon. It is also worth mentioning that there is a decent chance that the company might launch the phone alongside Honor 9X and Honor V30. If that’s the case, then we should expect more information surfacing in the coming days.