Huawei’s sub-brand Honor is now working on the stripped-down version of the previously launched Honor 9X smartphone. As expected, the device will be dubbed Honor 9X Lite. This is not the first we’re time hearing about it. In fact, the phone has been a part of numerous leaks and rumors in the past. Well, the device has now made its way to the GeekBench revealing key information along the way. 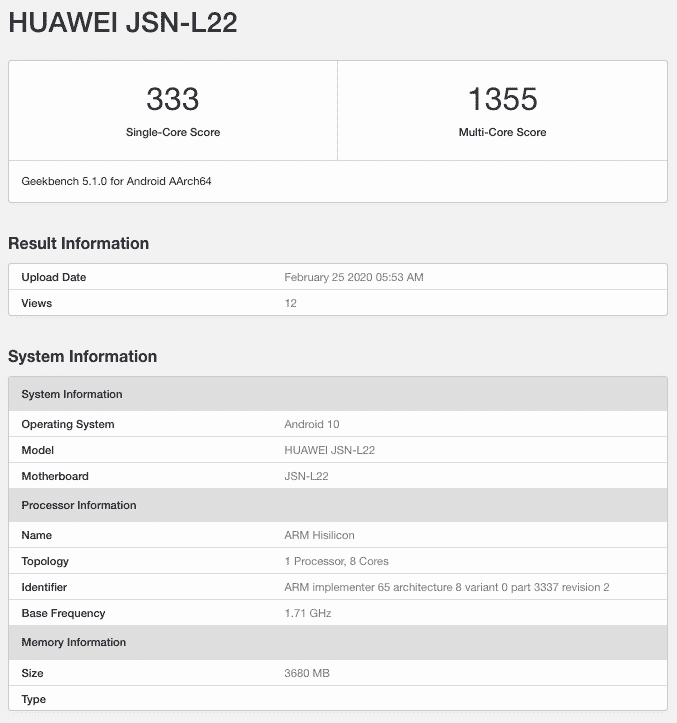 As per the listing, Honor 9X Lite comes with the model number JSN-L22. The device runs on a 1.71Ghz eight-core chipset paired with 4GB RAM. While the listing doesn’t talk about the chipset model or name, the available details point towards the Kirin 710F chipset. For those who’re unaware, it’s a mid-range chipset which is a bit dated in 2020.

On the software front, the phone will make use of the latest Android 10 operating system. Coming to the benchmark scores, the device managed to score 333 points in the single-core performance. On the multi-core benchmark test, the device received a score of 1355 points. This test score lines up with the Kirin 710F SoC.

Looking at the previous leaks, the device should come with 6.5-inch IPS LCD panel with HD+ resolution. There is going to be a dual-camera module at the back with 48MP primary sensor and 2MP depth sensor. Powered by 3,750mAh battery packed inside, the phone will offer up to 128GB onboard memory.

As of now, there is no official information on the possible launch date of the device. Since Honor 9X Lite has now made its way to the GeekBench listing, the official launch might be nearing. If that’s the case, then we’re speculating to receive more information in the coming days.