Redmi has officially announced that the Redmi K30 Pro will be official on March 24. This smartphone comes with the slogan “Speed ​​and Passion”. To this end, Redmi’s Product Director, Wang Teng, believes that this smartphone defines two things “speed” and “passion”. Wang Teng simply shared the post of Redmi’s general manager and Xiaomi VP, Lu Weibing. 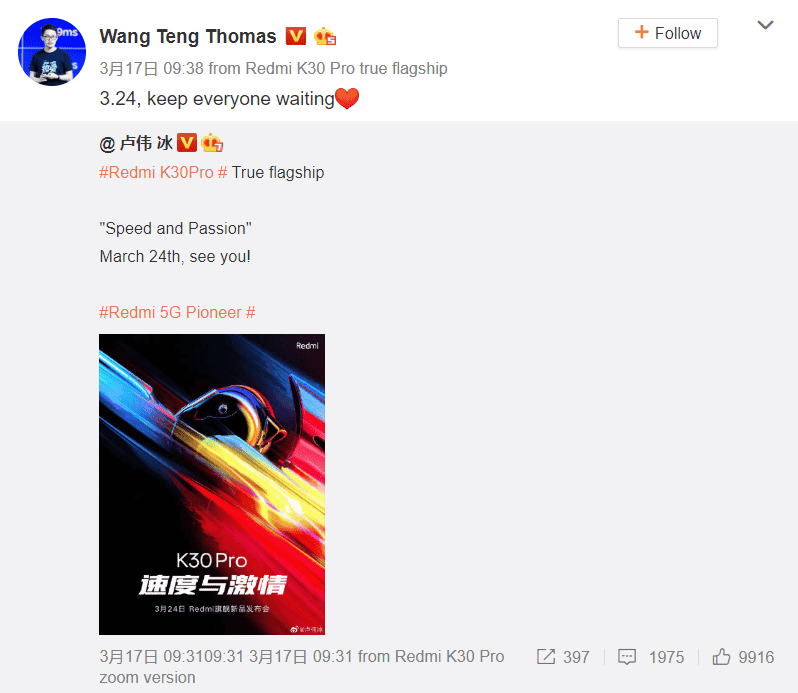 According to popular leakster (digital chat station), the main camera and telephoto of the Redmi K30 Pro high-end version support OIS (Optical Image Stabilization). However, we do not know if the production version will support dual OIS. In addition, the main camera is a 64-megapixel Sony IMX686 sensor. Recall that this sensor was launched by the Redmi K30 worldwide. It has a 1 / 1.7 ”large sensor, a 1.6 μm 4-in-1 large pixel, and a f / 1.89 large aperture. It supports RAW straight out. 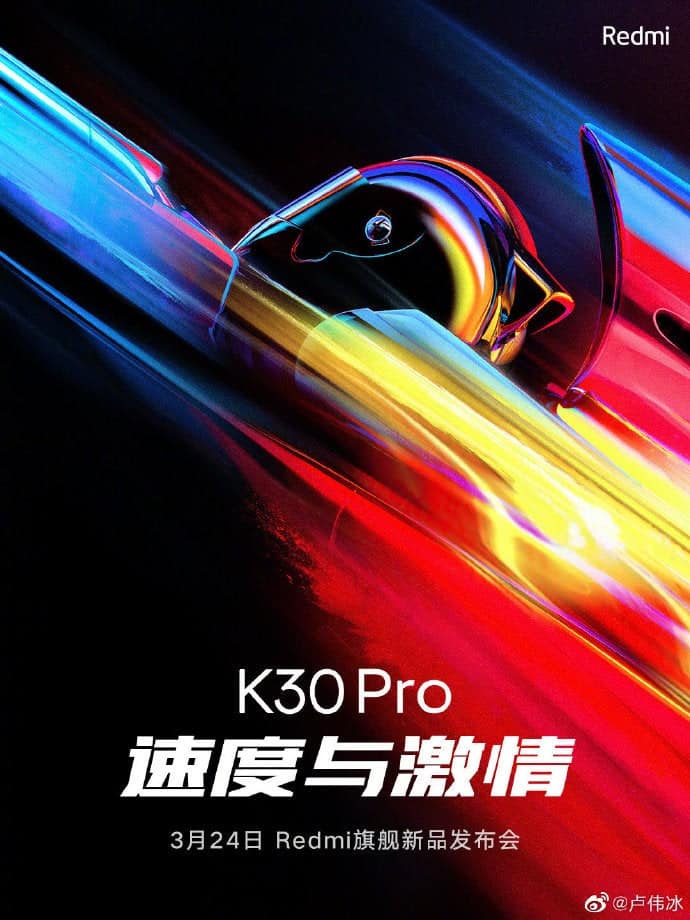 The K30 Pro will arrive this month. It will use a pop-up full-screen display and it will be Xiaomi’s first pop-up SD865 flagship. Supporting the Qualcomm Snapdragon 865 SoC will be an LPDDR5 memory and UFS 3.0 flash memory. The rear main camera maybe a 64MP shooter and this device will support up to 33W flash charge.

Redmi Product Director, Wang Teng, also hinted that the price of this smartphone is more than 3,000 yuan ($429). However, Lu Weibing says that the K30 Pro will not be higher than the Xiaomi Mi 10 series.

According to, Lu Weibing, in the 5G era, Redmi wants to be a 5G pioneer and insist on high quality. While producing high quality, it will also check its price/performance ratio.

Lu Weibing also stated on Weibo that the Redmi K30 Pro conference will not only include mobile phones. However, Redmi may also launch Redmi AIoT products. Netizens also speculated that Redmi WiFi 6 routers, Redmi bands, etc. may be released. At present, Redmi has covered many categories such as routers, smart speakers, TVs, wireless headsets, mobile power supplies, home appliances (washing machines), etc. This ecosystem will be further enriched and improved in the future.

Previous Microsoft to host an online press conference on March 30

Next Royole Flexpai 2 will go official on March 25