According to BGR reports, some hospitals in Thailand are using so-called ‘ninja robots’ to overcome the new coronavirus epidemic.

Why are they called ninja robots?

‘Ninja’ refers to them being all-black. But unlike the assassins we used to associate them with, they are incredibly adorable and are made to help medical staff.

These black ninja robots can help doctors monitor the patient’s temperature outside the ward or talk to patients through it. So medical staff can reduce the risk of infection.

These robots were originally designed to monitor the rehabilitation of stroke patients. They are now being re-used to monitor fever patients, reducing the burden on front-line doctors to control the spread of the virus.

According to AFP news agency, Viboon Sangveraphunsiri of Chulalongkorn University said that more variants of these robots are being planned for use in places like sterilization rooms or for tasks such as providing food and medicine to patients. As of Thursday, the robots have been used in four hospitals in and around Bangkok. 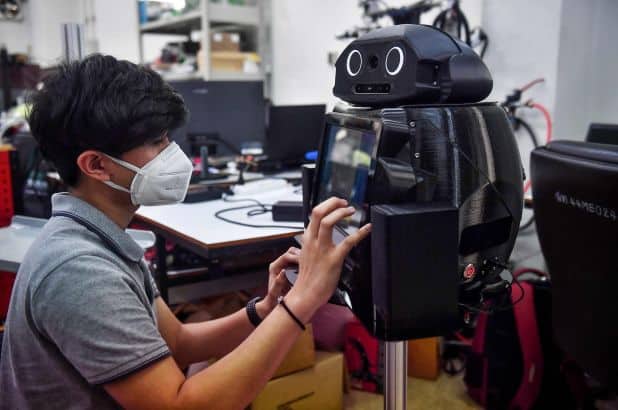 Viboon Sangveraphunsiri is part of a team of engineers at the university. The latter plans to build more robots for at least 10 hospitals in the area. According to data from Johns Hopkins University, so far, 599 newly confirmed cases have been confirmed in Thailand, including 1 death.

Unfortunately, there is no real move forward in terms of fighting against coronavirus. So social distancing still remains the primary defense right now. That’s why all we stay at home to somehow prevent the virus from spreading. In this sense, the hospital is the most ‘vulnerable’ place at the moment. So the ‘ninja robots’ can really help the medical staff.

Next Huawei Nova 7 series shows up on TENAA