Xiaomi fans have been waiting for this day for a long time. Following the schedule, Redmi held a new product launch conference. At this event, it not only uncovered the Redmi K30 Pro 5G cost-effective flagship but also brought a number of other amazing products, including new TVs, Xiao Ai touchscreen speakers. Anyways, we are more interested in the handset. It is divided into two versions – the standard version and the zoom version. As you guess, they are aiming at different users’ groups with different requirements for photography. 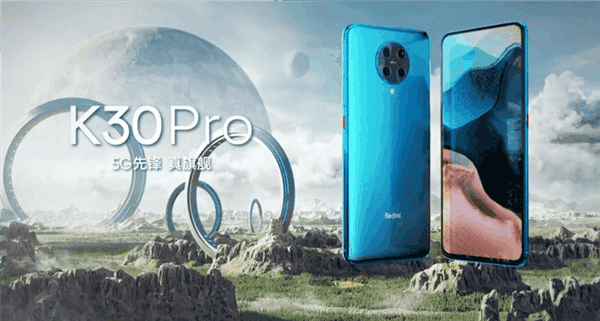 At the beginning of the conference, Lu Weibing took the K30 series and the Honor phone for comparison. According to Redmi’s data, its sales have surpassed the Honor V30. Later, because of the product shortage, Honor could get some losses back. Lu Weibing said that starting from the K30 Pro, Redmi must fully surpass its rivals.

Compared with the original K30 series, the Redmi K30 Pro has a change in appearance. The back of the phone uses an ‘Oreo’ design, with four lenses in a circle, and the details are also outlined by curves. There are four colors, namely Sky Blue, Moon White, Space Grey, and Star Ring Purple. Sky Blue and Moon White use bright glass technology, while Space Grey and Star Ring Purple use frosted glass technology.

Redmi has prepared a variety of protective cases for this new device, priced at 49 yuan ($7).

The Redmi K30 Pro sports a 6.67-inch true full-screen on the front. It has a resolution of 1080p and a 92.7% screen ratio, supports a touch sampling rate of 180Hz. It also uses an optical screen fingerprint solution. In addition, the K30 Pro selected the Samsung E3 material AMOLED screen. Its peak brightness can reach 1200 nits. For this true full-screen, the K30 Pro uses a lifting front lens. The company claims it can be popped up and retracted in 0.58 seconds. Also, it supports 300,000 pop-up lifespans and has 3D gravity sensing, which can automatically open protection when dropped. 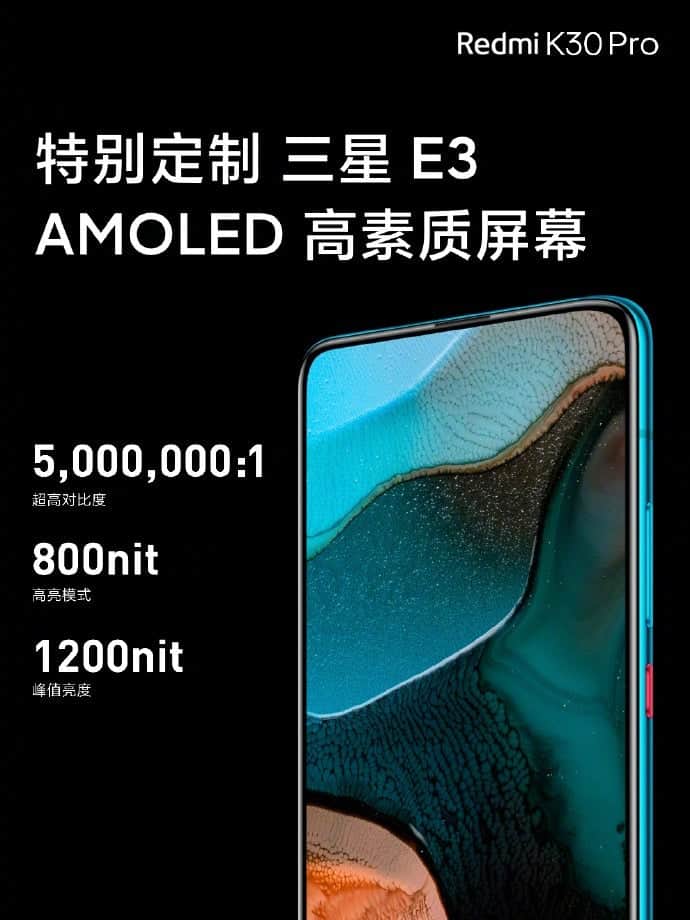 At the conference, Lu Weibing explained why the 90Hz refresh rate screen was not used. He said that when planning the product 10 months ago, he was not sure that the high refresh rate could become a trend. So he initially focused on ensuring battery life. The 60Hz and 90Hz screen driver ICs have different volumes. If you put 90Hz, you need to sacrifice a 200mAh battery. So they decided to guarantee battery life.

There is also an interesting detail – the K30 Pro has a 360-degree light sensor, two under the screen, one on the back of the fuselage (with the flash). Among them are two under-screen sensors, one for detecting ambient light + screen light, and one for detecting screen light only, and then obtain accurate ambient light through an algorithm. The back sensor is responsible for the detection of backlight conditions to ensure the brightness under the backlight conditions. 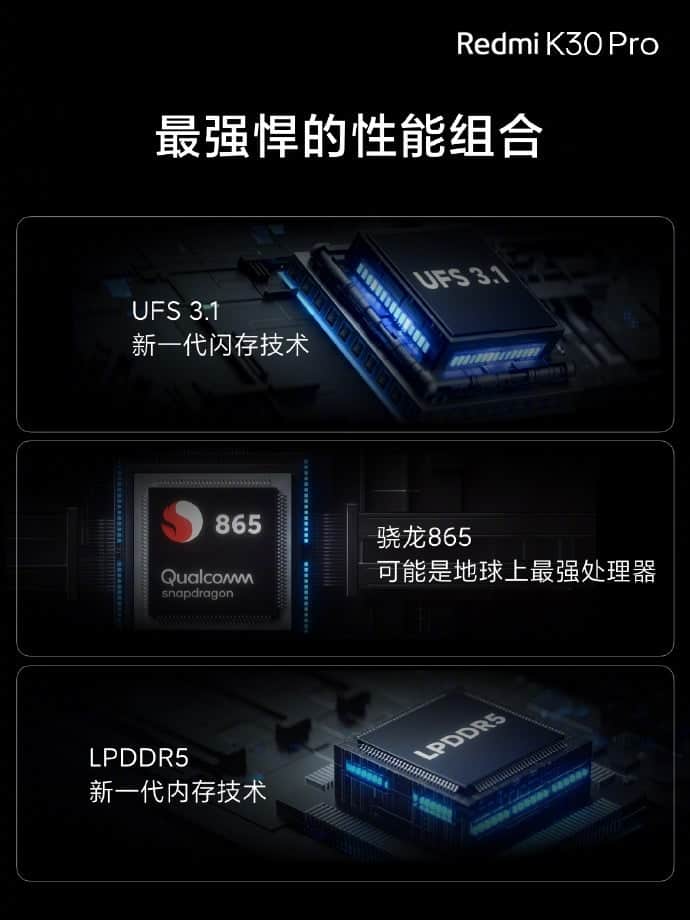 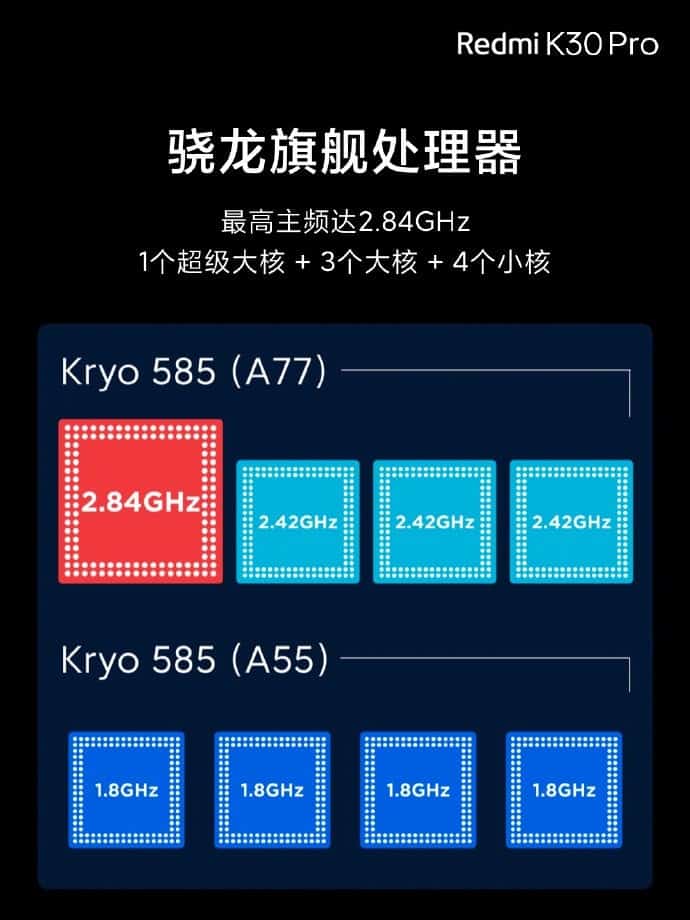 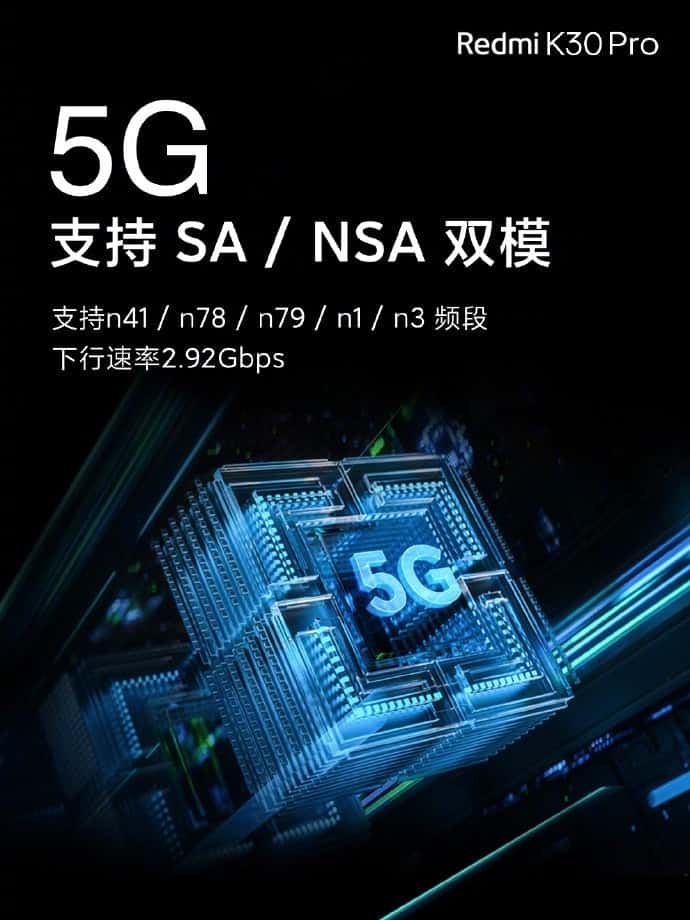 In terms of heat dissipation, the Redmi K30 Pro uses a lot of heat dissipation materials, including 7 layers of graphite structure, covering the battery compartment, the motherboard, and the sound cavity. The internal motherboard also adds a graphene heat dissipation layer, and the area of ​​the VC soaking plate reaches 3435 square millimeters. The company claims that this cooling system can quickly take away the core hot spots and keep the phone calm. 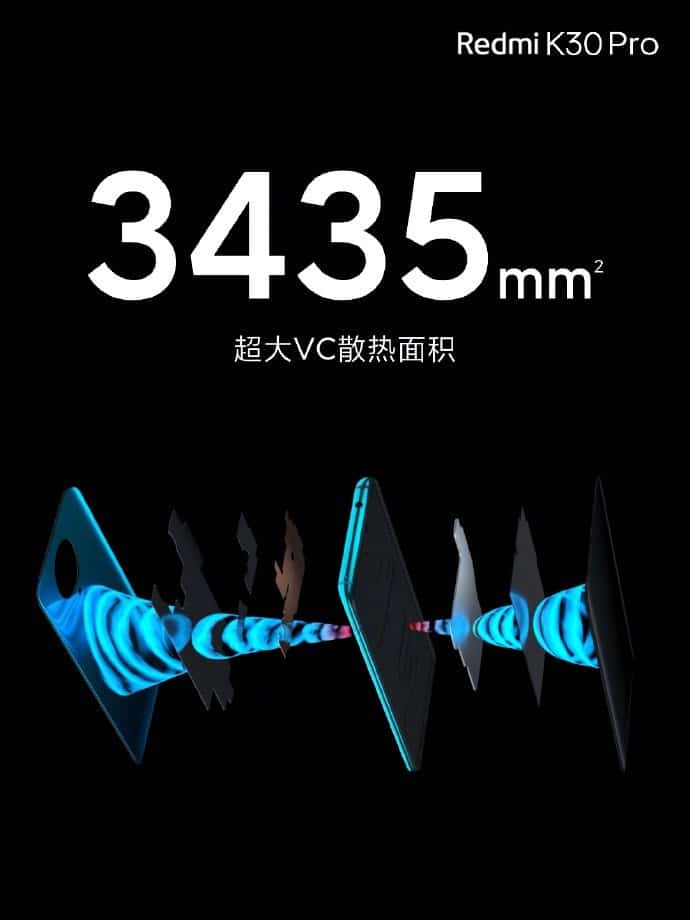 In addition to the flagship processor, ‘LPDDR5 memory and UFS 3.1 flash storage’ combination are the standard set of Android flagships. These configurations can be combined to ensure the new machine runs smoothly. In addition, the K30 Pro supports the latest WiFi 6 standard.

The main sensor size is 1/1.7-inch. It supports hardware-level straight out of 9248 × 6944 super high-resolution photos and supports four-in-one pixels for 1.6μm large pixels.

The front lens has a 20MP resolution, supporting 120 frames of slow-motion shooting and time-lapse photography.

In other details, the Redmi K30 Pro retains 1216 super linear speakers, ‘ancestral’ infrared remote control and multi-function NFC. In addition, the machine has a built-in Z-axis linear motor for better vibration. It sports a 4700mAh capacity battery and supports 33 watts of wired fast charging. The official claims that the phone can be fully charged in 63 minutes. 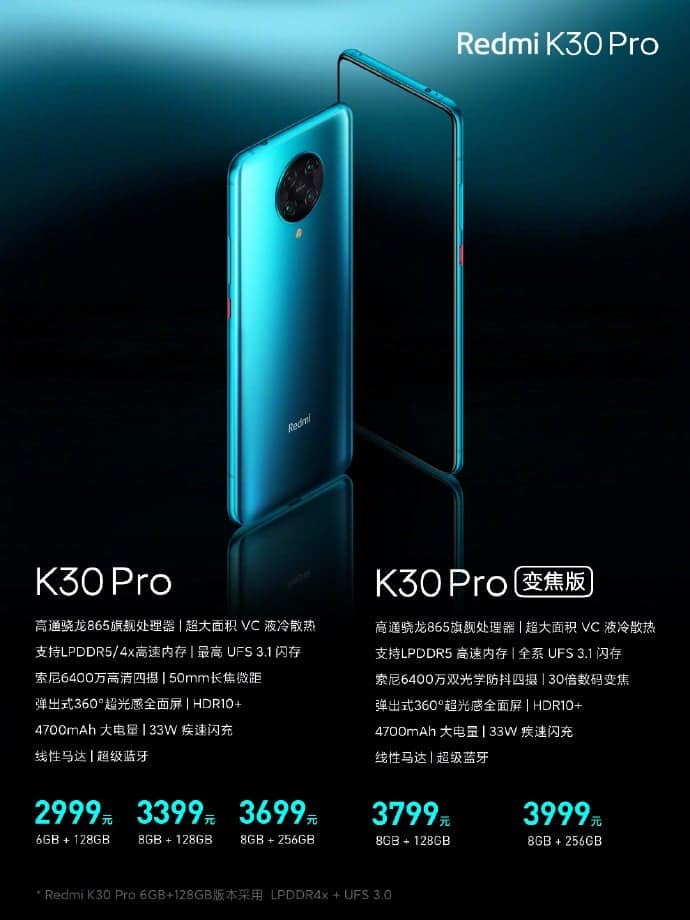