According to the latest reports, as governments and businesses step up their efforts to prevent the spread of coronavirus, consumers at home are exploring new ways to use mobile devices and applications. They are using their mobile devices to shop, manage finances, stay healthy, increase productivity and stay entertained during this difficult time.

The latest data released by the analysis platform App Annie shows that in terms of consumer spending on applications, a new record was set in the first quarter of 2020, and consumers worldwide spent more than $23.4 billion through Apple and Google App Stores. The Apple App Store accounted for $15 billion and the Google Play Store was $8.3 billion. Both figures have increased by 5% compared to the same period last year.

In addition, the average weekly time spent by consumers worldwide on apps and games during the quarter increased by 20% year-on-year. In the Apple and Google App Stores, non-gaming apps account for 35% and 15% of consumer spending, respectively. Meanwhile, consumers spent more than $16.7 billion on gaming this quarter.

At the same time, iOS users spend the most on games, entertainment, and photo and video applications. Among them, TikTok ranked among the top five consumer iOS spending this quarter, behind Tinder, YouTube and Netflix. 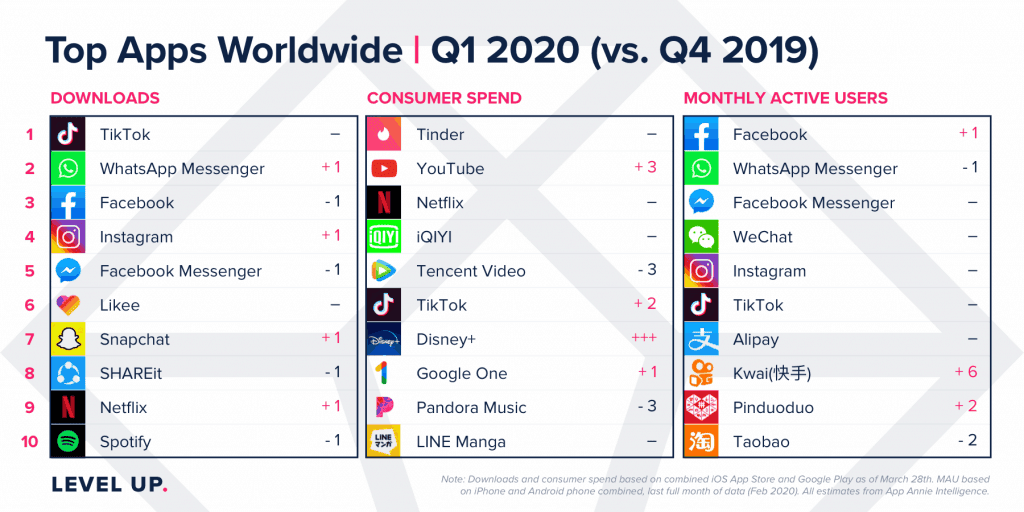 In the Google Play Store, downloads increased by 5% year-on-year to 22.5 billion times, while Apple App Store app downloads increased by 15% year-on-year to over 9 billion times. Non-gaming apps in the Google Play Store account for 55% of total downloads and 65% in the Apple App Store, suggesting that people are looking for a variety of mobile apps to manage their work and life at home.

The biggest markets for Google Play Store downloads are India and Brazil. This is because these two countries have large populations and prefer low-cost Android devices. In terms of downloads, China and the United States were the two largest markets for Apple App Store applications. They were the main drivers of download growth this quarter.