The Oppo Ace new series has been on the news for some time now. According to Oppo’s Vice President, Shen Yiren, announced that Ace has officially become a product line of Oppo. Shen Yiren said that the birth of the Ace series is Oppo’s ultimate response for flagship lovers. The Ace team will present the freshest technology, the most interesting design and the most fun experience for everyone. Oppo Ace 2, the new member of the Ace series, will arrive on April 13th. The latest information is that this smartphone will not only support a 65W fast charge, it will also come with wireless flash charging support. 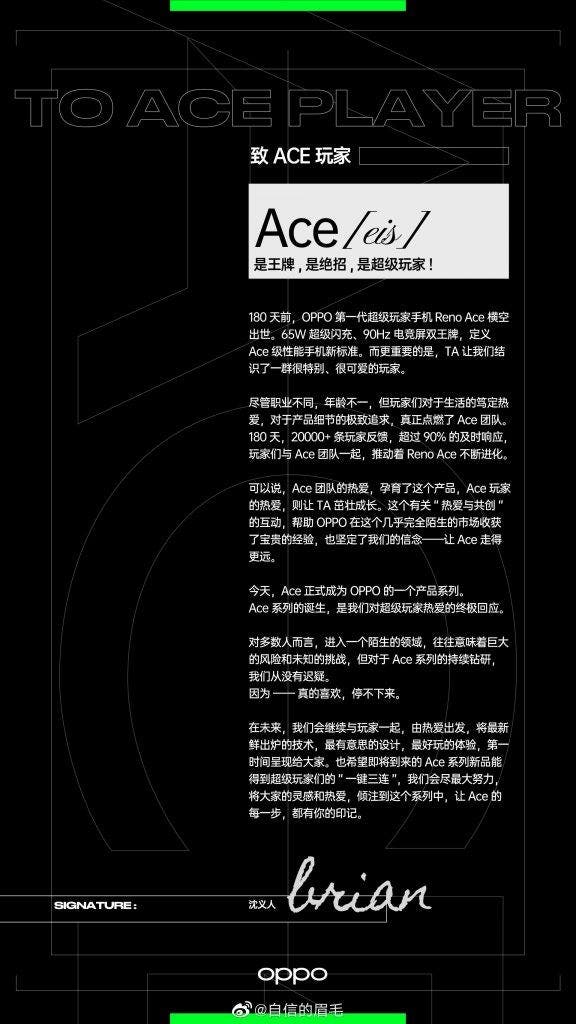 According to TENAA, this smartphone comes with a punch-hole AMOLED display. It also uses a quad-rear camera setup with a circular pattern. This smartphone weighs 185g and the thickness is 8.6mm. Of course, its not easy to find a 5G phone weighing less than 200g. Furthermore, the thickness of this device is also impressive thus it is worth looking forward to.

In the core configuration, this smartphone comes with a 6.5-inch display with a resolution of 2400 × 1080. Under the hood, we have a Qualcomm Snapdragon 865 flagship SoC with up to 12GB of RAM and 256GB storage. On the front, there is a 16MP camera while the rear has a 48MP main camera. Completing the quad-rear camera setup are 8MP, 2MP, and 2MP sensors. The camera of this smartphone is not exactly flagship as the Ace series promises.

Furthermore, the Oppo Ace 2 will come with a 4000 mAh battery which supports 65W SuperVOOC super flash charging and VOOC wireless flash charging. This device will also support wireless reverse charging. Oppo believes that in the field of flash fast charging, it is the best. What do you think about the upcoming Oppo flagship? Let us know your thought in the comment section below.