Huawei P40 series took the headlines in the last month due to its impressive specifications and camera features. The handsets cameras got all the praise in the past few weeks and now were awarded by TIPA. If you’re unaware, TIPA stands for Technical Image Press Associations, it is composed of many photography publications around the world. Now, it has awarded the Huawei P40 series with the award for the best Photo smartphone of 2020. It’s interesting to see this title right now, after all, 2020 still has eight months to go. 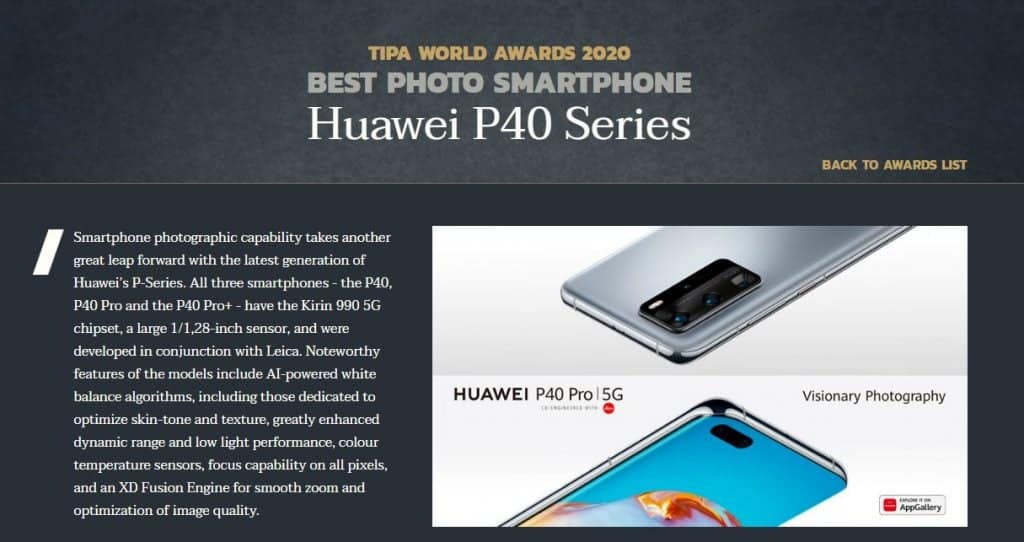 Worth noting, that these tests are more focused in the innovation than the actual performance. Huawei P40 series innovates in the market with its 50MP 1/1.28-inch unit. It also introduces omnidirectional phase-detect autofocus which probably will become a trend in the coming months. Huawei has a long history of success around TIPA. The company has been claiming the best smartphone photo award since 2017.

If we take the example of Huawei P40 Pro it features a 50MP Ultra Vision Camera with support for OIS. It is accompanied by a 40MP Cine Ultra-Wide shooter and 12MP SuperSensing Telephoto Camera. The last module is a 3D Depth Sensing Camera. Apart from the hardware which is impressive, the smartphone also packs a set of software features driven by AI.