Huawei is gearing up to launch its brand new Huawei Nova 7 series on April 23. On the same date, the company will also reveal a new tablet dubbed Huawei MatePad 10.4. The Nova 7 family is expected to be composed of Huawei Nova 7, Nova 7 SE and Nova 7 Pro. Thanks to leaked shots, we already know that the Nova 7 will sport a rectangular quad-camera setup. Today, Huawei shared a video that basically confirms every aspect of the handset’s design.

Additionally, the device has paid a visit to the GeekBench database confirming some of its specifications. The device bears the HNB-AN10 model number and has an octa-core chipset with 1.84GHz base frequency. According to recent leaks, it’s the brand new Kirin 985. Moreover, the variant tested has 8GB of RAM And Android 10 running. We assume that it will ship with Huawei’s recently released EMUI 10.1 straight out of the box. 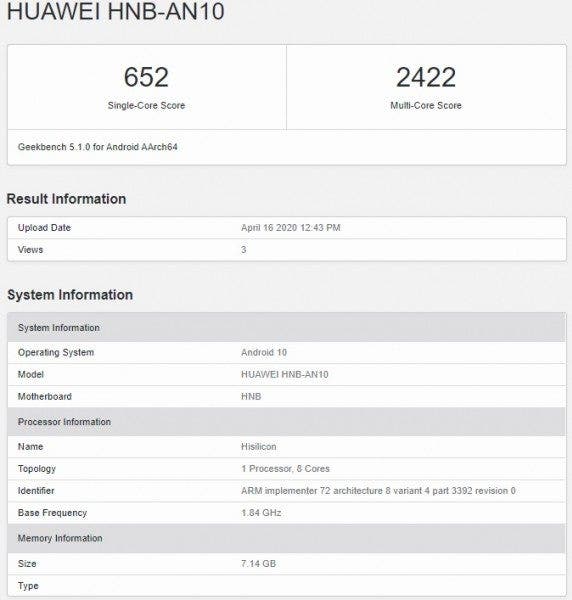 The Huawei Nova 7 Pro will come with the Kirin 990, while the Nova 7 SE will ship with Kirin 820. Since the company does not seems to be very concerned with the leaks popping out everywhere, we assume that more will come in the coming days.