Vivo’s sub-brand iQOO is preparing a new gaming smartphone with a flagship pedigree. The handset will feature solid specs and will be superior to the iQOO 3 that was released earlier this year. The handset will feature a 144Hz refresh display and a triple-camera array. Moreover, it is said to become the cheapest Snapdragon 865-powered smartphone dethroning the Redmi K30 Pro. The handset dubbed iQOO Neo 3 passed through the GeekBench database confirming some of its specifications. It’s interesting to see the handset appearing in the listing now that we’re just a few days away from the release of the new flagship killer. 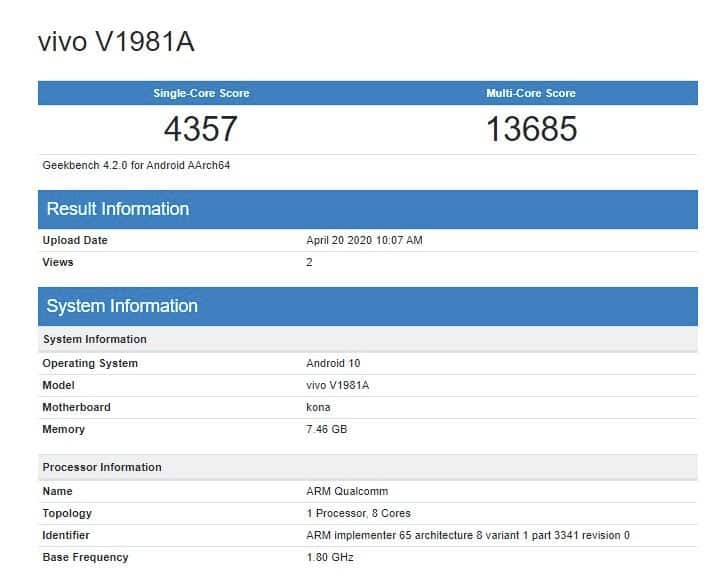 The iQOO Neo 3 surfaced with the V1981A model number and managed a score that is on par with most of Snapdragon 865-powered phones. On the single-core tasks, the handset achieved 4,357 points. When it comes to the multi-core tests, the handset scored 13,685 points. Apart from the flagship chipset the variant tested has 8GB of RAM and Android 10. We believe that the new handset will come with 256GB of UFS 3.1 storage. However, a 128GB variant isn’t discarded. The battery should have more than 4,000mAh of juice and will charge with 44W fast-charging. The handset supports 5G networks and has dual-stereo speakers.

Other details are yet to be revealed, but that will happen soon enough since the big reveal will happen on April 23.

Next Galaxy S20: Here's How to Fix the Annoying Sluggish Chrome at 120Hz Refresh Rate