According to several reports, LG has given up its G-series this year. Instead, the company will introduce new devices that will mark the start of a new strategy. One of these handsets is a mid-range phone dubbed LG Velvet. A few days ago, it emerged in some photos revealing a modern design with waterdrop notch and raindrop camera setup. Under the hood, the device will come with the Snapdragon765G meaning that it has 5G connectivity.

Despite the fact that the company will introduce a new range of devices, that doesn’t mean that it is ready to give up some concepts. Today, LG’s Dual-Screen accessory has received certification in Korea. The “Portable screen cover” accessory bears the “LM-G905N” model number and has been approved by the Korean NRRA. According to GSMArena’s report, while LG changed the commercial name of its unreleased G9 to LG Velvet, the company hasn’t done the same for the model number. For that reason, the upcoming accessory has a similar model number to what we would expect from an LG G9. 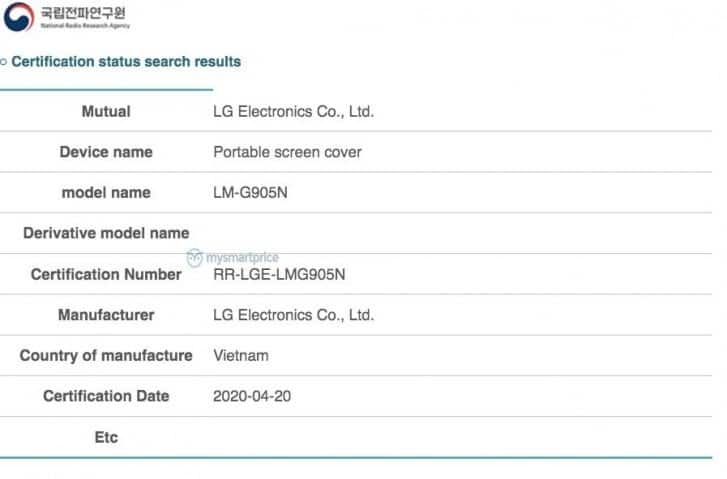 The dual-screen accessory is an interesting product. After all, it brings the feel of a dual-screen device without all the limitations that are currently present on these devices. If you need a second screen you just need to put your phone in the case. If you want a true smartphone experience, you can simply remove the accessory.  Of course, reports indicate that this product will be sold separately.

We’ll have to wait for more details about the LG Velvet and this screen. However, we believe that it will be available pretty soon.