Meizu probably is one of the few companies from China that have currently zero to no influence outside of the country. Its fellows Xiaomi, OnePlus, Realme, Oppo, Huawei, and even Vivo are pretty popular outside of China. They are what we call mainstream companies with Global influence nowadays. Although it launched some smartphones in China, Meizu is missing a proper Global smartphone since the launch of Meizu M16th released in India towards the end of 2018. Now, our eyes are set to the upcoming Meizu 17, the company’s next flagship.

In a recent post shared by the company’s official Weibo account, we got the confirmation that the Meizu 17 will be revealed in China on May 8th. Along with the post, we have an official render revealing the Meizu 17 design in all its glory. 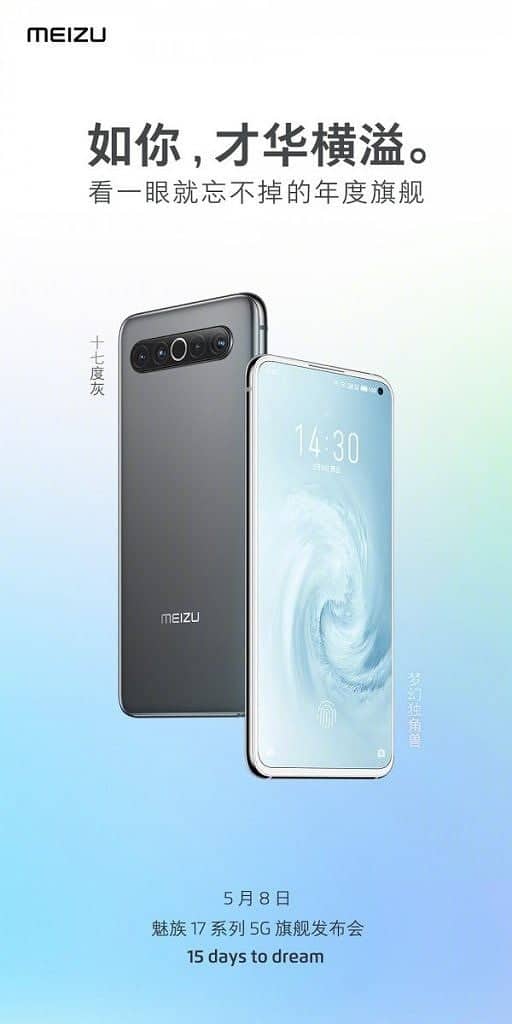 We already saw the Meizu 17 in real life thanks to a leaked image. The new render basically confirms what we’ve already seen, the Meizu 17 will sport a Quad-Camera setup on the back. It’s a horizontally-aligned array with four cameras and a LED flash ring right in the middle. Moving around to the front, we have a flat display flaunting rounded corners and minimal side-bezels. At the top-right corner, there is a minimal punch-hole housing the selfie shooter.

Unfortunately, the render does not bring any detail regarding the specifications. However, it’s easy to assume that as a flagship it will rock Qualcomm Snapdragon 865. Moreover, 5G connectivity will be present straight out of the box. The render also confirms the presence of a under-display fingerprint scanner, so we believe that this panel is an OLED unit. Of course, we’ll know more soon enough as Meizu will likely increase the number of teasers.