Chinese manufacturing giant, Xiaomi, has been doing quite a lot in the smartphone industry. The company has a good working relationship with Samsung, especially in the camera department. Recall that Xiaomi is the first company to use Samsung’s 108MP camera – both companies developed the sensor together. Now, Xiaomi and Samsung are working again on a 150MP camera. According to reports, Xiaomi will also be the first to use this sensor in Q4 2020. 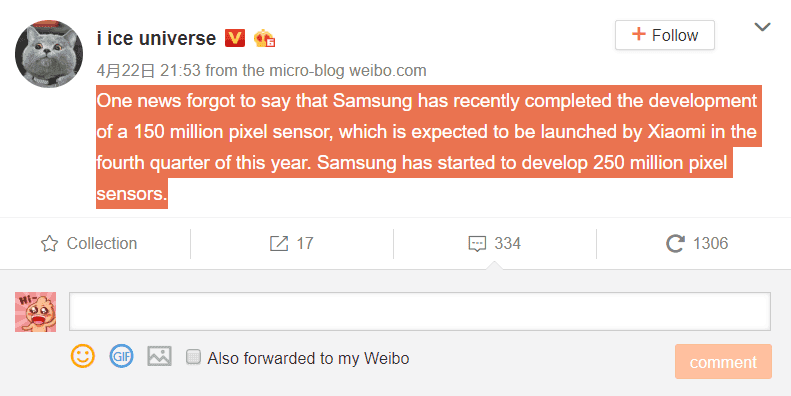 For the 108MP sensor, Xiaomi debuted it with the Xiaomi Mi Note 10/CC9 Pro. However, there is no information on the Xiaomi device to use the upcoming 150MP sensor. According to reports, the R&D of the Samsung 150MP camera sensor is on its way. In fact, it is done with phase one. Although there is no much information regarding this sensor, we know that it uses a 1-inch footprint. Furthermore, this sensor makes use of Nonacell technology. Thus, it can combine nine pixels into one.

Not just Xiaomi, Oppo & Vivo will use this sensor

The advantage of this is that it can easily achieve a higher light absorption and the final output will have a pixel count of around 16MP. Furthermore, IceUniverse Weibo post also claims that Samsung is working on a 250MP camera sensor. In addition to Xiaomi, Oppo and Vivo are also in the queue to use the 150MP camera. However, these companies will release these devices in Q1 2021 with the Qualcomm Snapdragon 875 chipset.

It appears that Samsung is raming through the camera industry with multiple developments. Recent reports claim that Samsung is planning on a 600MP sensor which will defeat the human eye. Such high-resolution sensors should not only be in use in smartphones. Camera sensors have an increasing demand in areas such as autonomous vehicles, IoT, and drones. Samsung assumes that the trend towards high-resolution sensors will continue beyond 2020. The South Korean manufacturer aims to supply camera sensors in the future that can capture more details than the human eye. However, the Samsung manager did not specify a specific time for this.

Previous MIUI 12 has a brand new technology for privacy protection