Oppo has just recently established its Reno lineup of smartphones as its new leading mid-range and budget products. Adding to it, the company has recently trademarked a new Oppo Reno Glow series of smartphones, as spotted by LetsGoDigital.

Going into the details, Guangdong-based Oppo Mobile Telecommunications Ltd., filed a trademark named “Reno Glow” at the EUIPO (European Union Intellectual Property Office) recently. The trademark has been published on April 24th, categorized under Class 9 products, that includes smartphones. The application was filed by Domingo Galletero, a company from Alicante, Spain often acts on behalf of Oppo, like the previous models it had filed last year.

The trademark doesn’t have further details about the smartphones. But going by the name “Glow” were guessing that it might be a camera-centric device since the Oppo Reno series of smartphones have followed a similar agenda in the past. It must be noted that Oppo’s previous Reno series even had the marketing term “Glow in the dark” referring to ultra-night mode capabilities. 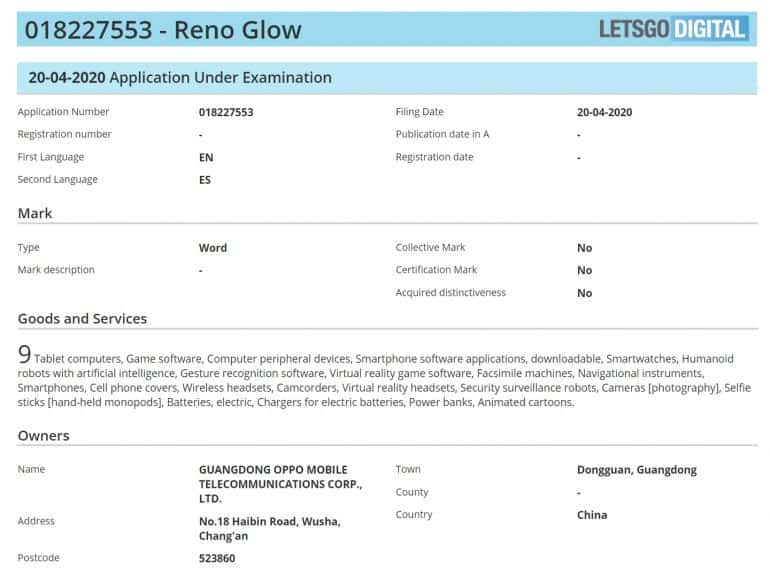 Another possible explanation for the Glow moniker could be higher refresh rate and a higher resolution displays. The trend in 2020 is accompanying higher refresh rates with flagships sporting 120hz AMOLED displays. Perhaps, the Reno Glow series could replicate the same. The support for 5G is also likely since Europe is pushing itself towards more adoption and stable 5G connectivity. But that’s pretty much what we can think of right now.

All in all, the details of the new Reno Glow series are pretty scarce at the moment. It could also be a rebranded series of Oppo’s new Reno series that debuted recently in China but we’ll have to wait for further leaks to pop on our radar.

Previous WiFi 7 Coming, It Can Reach A Speed Of 30Gbps!