In India, Samsung now ranks third on the podium of the biggest sellers of smartphones. According to data from the Canalys firm, it is the Chinese Vivo which takes second place with 6.7 million units sold and 19.9% ​​of market share. This against 6.3 million ‘units shipped and 18.9% market share for Samsung in the first quarter of this year.

Green indicators for the Chinese brand, whose sales almost doubled compared to the first quarter of 2019. Xiaomi is still the leading seller of smartphones in India, with 10.3 million units. With a market share of 30.6% for the period between January and March.

Vivo is a subsidiary of BBK Electronics, and it is not the only company in this Chinese group to post good performances. Realme, another subsidiary that also manufactures smartphones, now has 11.7% market share in India (3.9 million units sold) against 4.5% last year. Excellent results that enabled it to climb to 4th place, followed by a third subsidiary of BBK Electronics, Oppo. The combined sales of the three entities represent more than 40% of the smartphone market in India. 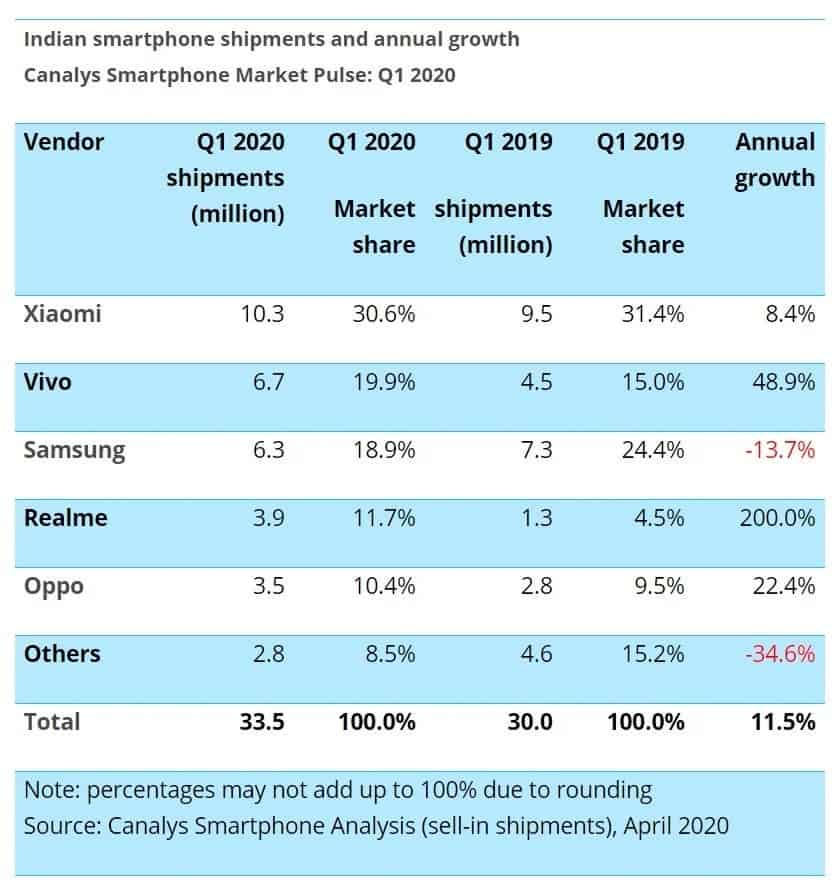 Canalys nevertheless analyzes that Vivo’s figures could be disappointing in the medium term. Sponsor of the IPLT20 (the Indian Premier League, the main professional cricket competition), it could suffer from its stoppage due to the Covid-19 pandemic. India is, after China, the main market for the company, which has made large marketing investments to attract consumers. Consumers who could now lower their spending in a complex economic context and a slowdown in production.

India is the second world market in volume of smartphone sales, behind China and ahead of the United States, according to a study by Counterpoint Research. It is also experiencing good growth as the global smartphone market begins to slow down. 158 million smartphones were sold in India for the year 2019, up 7% compared to the previous year. A market coveted by the major technological players, who are gradually installing production units. We are talking about Samsung but also Apple for the iPhone XR.

Next These 28 popular antiviruses have critical security vulnerabilities