Last year on Google I/O, the search giant announced new accessibility features for Android, one of which was Live Caption. Its essence lies in the fact that the device recognizes speech in any video and adds subtitles to it in real-time. In October, this feature appeared on devices of the Pixel 4 family, and later on other Android smartphones.

Live Caption has now reached computers thanks to the Chrome browser. Experts from the Techdows website noticed that a “checkbox” appeared in the Chrome Canary browser settings to activate the new feature. Live Caption is available in browser builds starting from version 84.0.4136.2. To use the function, you need to activate it in the settings, restart the browser and enable Live Caption on the accessibility settings page. 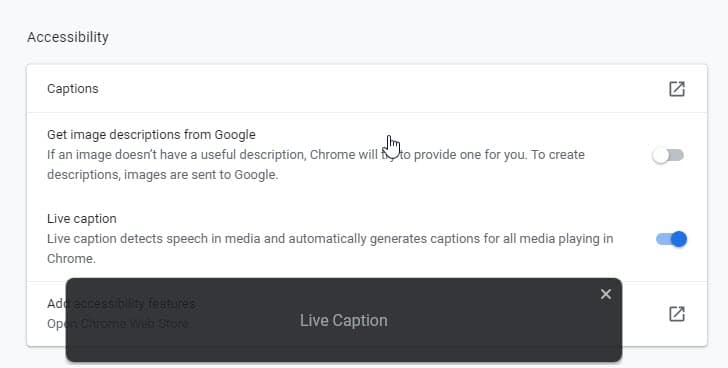 Google already offers the option of creating automatic subtitles on YouTube. But the new feature allows you to generate subtitles for any video viewed in Chrome. First of all, the function will be useful to people with hearing impairments. But it can also be useful to those who, for example, want to learn a foreign language. It should be noted that in Android, this function only supports English. With Chrome, probably the situation will be similar.

Since this feature is still hidden, it may take some time before it becomes available to a wide range of users. It is also possible that Google will add this feature to the Chromium project. So that it can appear in third-party browsers such as Microsoft Edge.

Regarding Google Chrome, according to the latest Netmarketshare report in April, this browser gained a market share of 69.18% (from 68.5% in March). This way, it’s the most-used browser worldwide while Chromium-based Microsoft Edge obtained 7.76% (from 7.59% in March). Firefox has also grown from 7.9% to 7.25%.

Next Android: Google fixes 39 vulnerabilities with the May 2020 patch