Chinese manufacturer, Meizu, will release the Meizu 17 series on May 8th. According to reports, this series will have two smartphones which are Meizu 17 and Meizu 17 Pro. Tow days before the launch of this series, it made its way to Geekbench’s database. 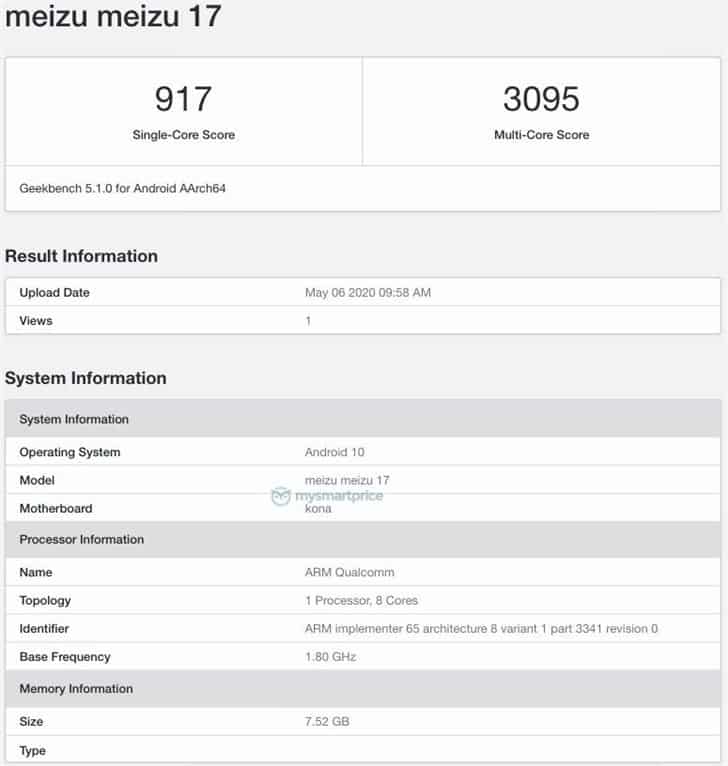 The information on Geekbench shows that this phone comes with a “kona” motherboard. This means that the phone uses a Snapdragon 865 SoC. On the single-core test, this device scores 917 and it hit 3095 on the multi-core test. These scores are consistent with the Snapdragon 865 processor. The unit that was tested on Geekbench comes with 8GB of RAM and runs on Android 10.

The Meizu 17 / Meizu 17 Pro will be the company’s first 5G mobile phones. According to speculations, this phone should use a 6.5-inch 90Hz Samsung AMOLED screen with a Snapdragon 865 processor. It also supports LPDDR5, UFS 3.0, 4500 mAh battery, an on-screen fingerprint sensor as well as a horizontal linear motor.

Recall that the Meizu 17 series also comes with a new technology called Meizu mSmart 5G. This is a power-saving technology that enables the 5G phone to save over 60% power. The company has shown that Meizu 17’s battery lasts for is 11.77 hours (with active 5G network). Furthermore, this new Meizu series can identify and connect to the 5G network faster.

Previous UMIDING A7 Pro launched, is it the new value king ?

Next iPhone SE Has An Exclusive LCD Screen Supplier, It's JDI