Back in March 2020, an unknown Vivo smartphone with the moniker Vivo 1937 appeared on GCF and WiFi Alliance for certifications. Well, the same smartphone has now made its way to the Google Play Console. Vivo 1937 is expected to arrive with a Vivo X50 Lite moniker. As expected, the console listing has revealed some key specs and of course, the front design along the way. We now have some information on chipset, screen, RAM, software and more. 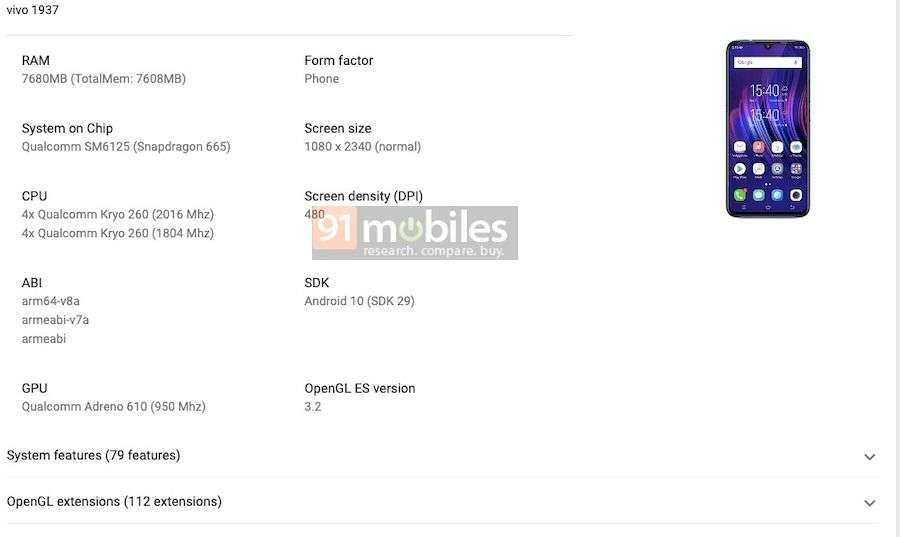 As per the listing, Vivo X50 Lite will come with a FullHD+ display with a resolution of 1080 x 2340 pixels and a pixel density of 480 PPI. Under the hood, the phone will run on a mid-range Snapdragon 665 chipset paired with Adreno 610 GPU. In terms of storage, we’re looking at an 8GB RAM and unknown onboard memory. For those who’re unaware, the SD 665 SoC is manufactured with a 7nm process having eight cores.

Apart from specs and features, the listing has also revealed the front design of the device. We’re looking at a waterdrop notch display with thin bezels on the sides. Sadly, there is no render image showcasing the back of the device. It is also worth noting that this could very well be a placeholder image. We should wait for more render images to see the expected design of the phone.

At the time of writing this, there is no official timeline for the launch of the Vivo X50 Lite smartphone. We are expecting more leaks and information to come forward in the coming weeks. On a similar note, Vivo is also launching its Vivo V19 smartphone in the Indian market next week on May 12. On the very same day, Honor and POCO will also be launching their own smartphones after numerous delays.

Previous Vivo V19 Indian Launch Set for May 12, Might Price Around $331 Price Tag