Vivo’s new iQOO Z1 smartphone, whose announcement is expected on May 19, has appeared in the Geekbench 5.1.1 benchmark database. Recall that the device will be the first smartphone built on the basis of the latest MediaTek eight-core Dimensity 1000+ processor with support for 5G networks.

In the benchmark database, the smartphone appears under model number V1986A. In a single-core performance test, the device scored 781 points. While in multi-core, it scored 3070 points. We do not know the exact processor model, but the GSMArena portal is sure that we are talking about the Dimensity 1000+ mobile chipset.

In addition, the device has 8 GB of RAM and runs on the Android 10 operating system. It is likely that the proprietary IQOO UI shell is used on top of it. 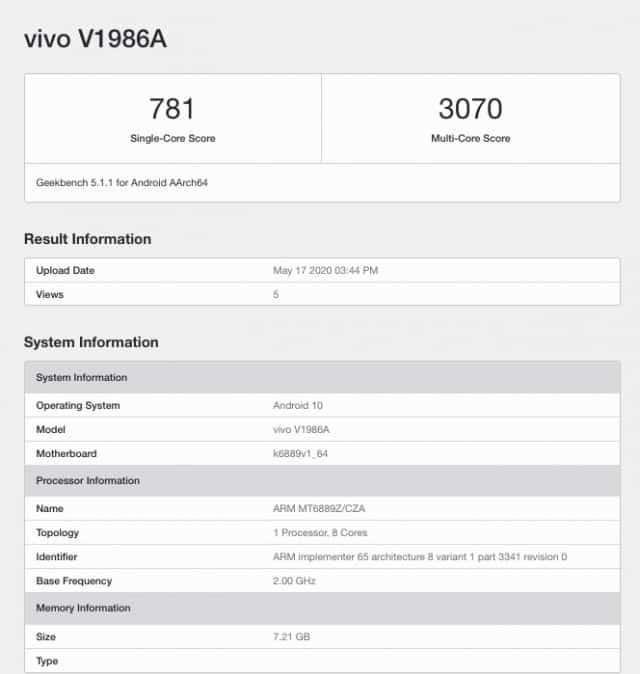 According to the latest information, iQOO Z1 will receive an IPS-display with a refresh rate of 144 Hz, 6/8 GB of RAM and 128 GB of storage memory. The battery capacity of the smartphone will be 4500mAh. The kit will include a 44W fast charger.

At the moment, we have an estimation for the cost of the version with 6 GB of RAM and 128 GB of memory. According to a poster found in one of the Chinese stores, this model will be offered at a price of about $ 350.

For more information about the new iQOO Z1, we can find out tomorrow.

Recall that recently, IQOO 3 has officially been available. It offers high performance and top of the range hardware specifications. In addition, it has 5G networks support (but there is also the 4G model) and a particular attention to gaming and photography.

Another important innovation introduced by iQOO 3 5G is the iQOO UI. A user interface based on dynamic wallpapers and a series of dedicated features, including the Monster Mode.

Previous Mozilla will permanently get rid of Flash in Firefox 84