Although the notebook market is not as lucrative as the smartphone market, Xiaomi still releases a couple of notebooks annually. On May 26th, the Chinese manufacturer will have a launch event where it will release a new RedmiBook. Earlier today, the company released an official poster with hidden display details. Now, in a series of Weibo posts, Xiaomi Notebook has confirmed some details of the upcoming RedmiBook. 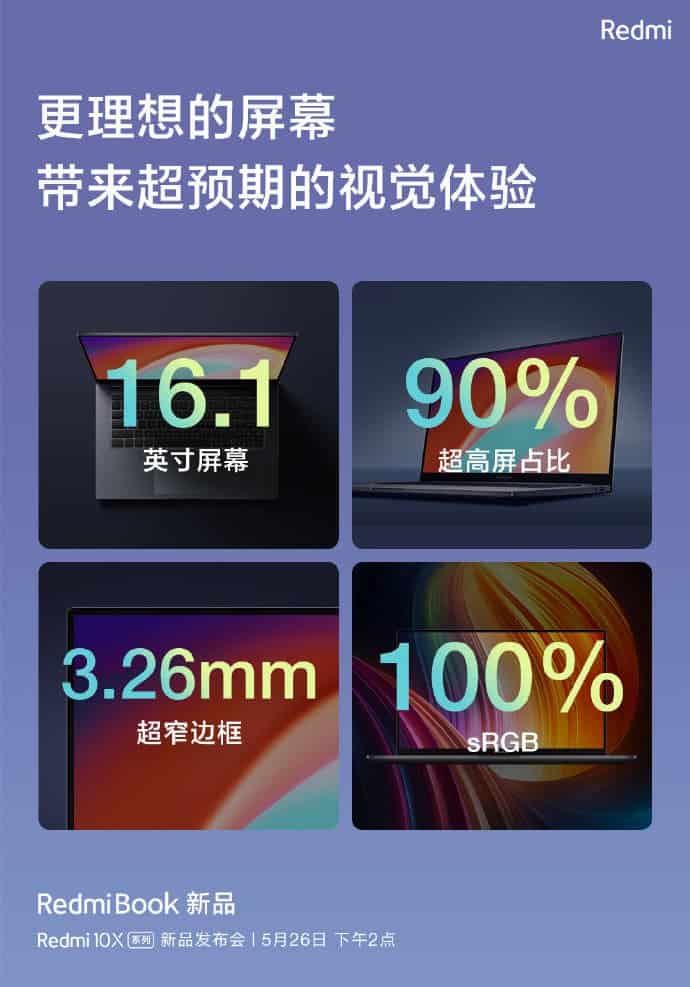 According to the official posters, the new RedmiBook will come with a 16.1-inch display. Redmi says that it will put the 16.1-inch screen into its 15-inch body. Furthermore, another poster confirms that the bezels of the display will be 3.26mm. The thin bezels make it possible for the 16.1-inch screen to fit in a 15-inch body. In addition, the new RedmiBook has a 90% screen-to-body ratio. Of course, with the thin bezels, the display ratio should be high. That is not all, another post also says that this notebook will come with a 100% sRGB wide color gamut.

Summary of the posters from Xiaomi Notebook

Furthermore, there are speculations that this notebook will have R5 4500U and R7 4700U processors. These processors will be assisted by 16GB of RAM and 512GB SSD as standard. The SSD model is Samsung’s PM881. According to reports, the RedmiBook 13 / 14S / 16 is now open for appointment. The Jingdong page shows that it will be available for sale at 13:59 on May 26th.

This is about all that we know regarding this notebook for now. However, we still have a few more days before launch thus we expect to get more information.

Next Sony: The PS5 will be 100 times faster than the PS4, coming in early June