A few weeks ago, the rumor mill started to expose a new Android TV dongle made by Google. The device is codenamed “Sabrina” and seems to come to increase the companies portfolio of smart products and to push forward the Android TV platform. The folks at XDA-Developers obtained a marketing video from a pre-release firmware build. Now, they’ve revealed some of the upcoming hardware features in Google Sabrina Android TV stick.

The developer deadman96385 shared the pre-release firmware build for “Sabrina” and also discovered some of the Android TV dongle’s hardware specifications after inspection of the Device Tree Source. The files specify which hardware features of the SoC platform to enable when booting. According to the explanation, the device has 2GB of RAM and is powered by the Amlogic S905X2 SoC. This particular platform boasts the 12nm process and has a Quad-Core CPU with 4 ARM Cortex-A53 CPU cores clocked at up to 1.8GHz. The graphical tasks are ensured by an AMR Mali-G31 GPU with two cores. The System-on-Chip also offers support for 4Kp75 10-bit H.265 video content, video output at up to 4K@60fps over HDMI 2.1. It also supports HDR video playback with HDR10, HLG, Dolby Vision, and more.

Interestingly enough, the Amlogic S905X2 is a common choice among Android TV devices. For that reason, it’s not a big surprise to see Google sticking with it. Other hardware features of Google’s Android TV stick include Broadcom’s BCM43569 combo chip for Wi-Fi / Bluetooth support. Moreover, the device also has Cadence’s Tensilica HiFi 4 DSP. The developer also found some other important features of the device. It will come with a pre-installed system application called “SabrinaService.” This application has references for “Auto Low Latency Mode.” This is a feature of the HDMI 2.1 specification that allows the device to send a signal to the connected TV to get it to disable post-processing features that might add latency to displaying the video. There are some TVs in the market that set this low-latency mode described as “Game Mode” promising to reduce latency for games. 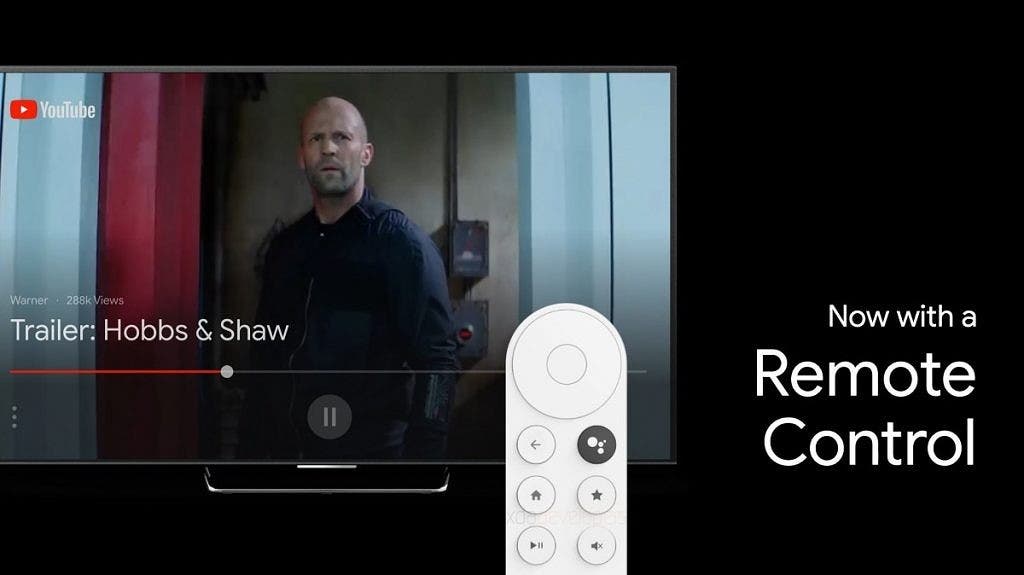 Support for Google Stadia and dedicated remote controller in tow

Interestingly enough, this is a feature that can pretty much come to improve Google’s cloud game streaming service, Stadia. According to some reports, Google plans to bring Sgtadia support to Android TVs in 2020. It makes perfect sense to see the search giant unveiling an Android TV dongle as the first device to support the company’s cloud game streaming service. The latest update to Stadia enables experimental Android TV support, however, it’s far from stable at the moment.

The code inside SabrinaService also hints a “GlobalKeyReceiver”. It suggests a remote with the Netflix button, YouTube button, and a microphone. Moreover, another class reveals that this dedicated remote likely connects to the device via Bluetooth.

Unfortunately, there are still no clues regarding the launch and actual price of this Google dongle. However, it’s good to see the company pushing a new product to increase the offer of easy and accessible Android TV devices.