Qualcomm is said to announce a new Snapdragon 5G SoC on June 17th. Reports from China indicate that Xiaomi could be the first one to utilize the new processor and it could end up in the CC series of smartphones.

Qualcomm has reportedly sent invites in China which has a tagline of a new product launch. It says the company will launch a new 7 series of Qualcomm 5G SoC on June 17th at 10:00 AM Beijing time.

The supposed event could be an online event as mentioned in the invite where Qualcomm is also expected to discuss the future of 5G and share its progress. However, reports from China say that this could be the new Snapdragon 775G SoC. 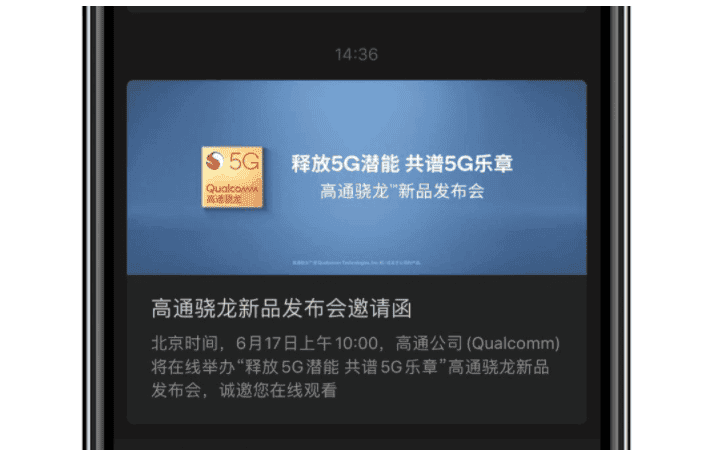 Although the tentative name could be something else, Qualcomm will reportedly ship limited quantities of the SoC in mid-June. Codenamed as SM7350, the new SoC will take a humongous 40% leap in performance compared to the Snapdragon 765G that launched back in December.

As for the GPU, it is likely to be a 50% upgrade over the predecessor which is a significant upgrade to say the least. Reports also indicate with the GPU upgrade, the new SoC will likely match the Company’s Flagship Snapdragon 855, making it the most powerful mid-range chip yet.

Interestingly, reports indicate that the newer SoC will be based on 6nm architecture. This will mark the company’s debut on the newer architecture when the earlier launched the Snapdragon 765G were based on a 7nm process.

The performance leap, however, could be due to the newer Cortex A-77 cores. It is likely to have four cores based on A-77 which promises a significant 20-25% CAGR(compounded annual growth rate) of performance compared to the older A-76 cores.

Additionally, the new SoC will likely support Vulkan based graphics support which is a cross-platform API for high-performance 3D graphics providing high quality and real-time graphics in applications.

Read Also:  Global smartphone wholesale revenue will increase by 13% in 2021

Rumours also indicate the Xiaomi could be the first company to launch a smartphone with the new 775 SoC. Codenamed “Gauguin”, the device will likely have a 90Hz refresh rate screen, Samsung’s new HM2 sensor, supporting up to 120x digital zoom.

While the invite itself indicates a launch next week, Qualcomm is yet to make an official announcement regarding the launch. Let’s wait for more info as we get closer to the launch.

Previous Your Xiaomi Smartphone Will Not Get These MIUI 12 Features

Next U.S. to modify its laws - to allow Qualcomm and other U.S. companies to cooperate with Huawei on 5G network standards