The research company Canalys has provided another of its reports for the global market for a smartwatch. Worldwide, smartwatch shipments grew 12% YoY in the first quarter of 2020. That’s a pretty awesome result, especially when we take in mind the spread of COVID-19 and all the consequences it brought to manufacturing processes, logistics, and consumerisms. If we take the smartphone business as an example, we can see how the pandemic decreased the sales of smartphones during the first quarter. However, this tendency of decline doesn’t follow in the smartwatch segment. 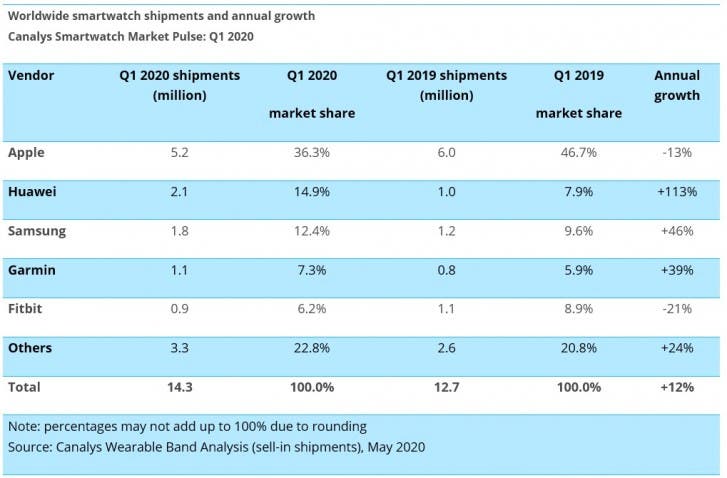 Apple still has the domain of the smartwatch market, with 5.2 million shipments of multiple Apple Watch models. However, this number represents 13% fewer shipments if we compare it with last year’s result. Huawei comes in second with 2.1 million units shipped with 113% of growth YoY. Samsung comes in third place with 1.8 million units shipped compared to its 1.2 million in the first quarter of 2019. Garmin and Fitbit rank fourth and fifth, respectively. Garmin grew 24% Year on Year, Fitbit fell 21% YoY.

During the first quarter, North America accounted for less than one-third of smartwatch shipments. However, the demand for Apple Watch models has grown consistently in overseas markets. The sales numbers decreased in the United States and Europe. According to Canalys, this fall is due to the North American’s bigger focus on the Apple AirPods as this past holiday season’s must-have Apple accessory. Its growth outside of North America can be attributed to carrier promotions in Southeast Asia and Latin America.

China is leading the smartwatch segment

The research firm states that massive growth has been seen in China. The big majority of smartwatch shipments were concentrated in the country – 66%. According to the report, Xiaomi and Apple accounted for most of China’s connected smartwatches. Apparently, the recent surge in the sales is moving the smartwatch segment t in the country. Smartwatch sales might keep growing in the coming brands with local brands like Xiaomi, Huawei, and Oppo. 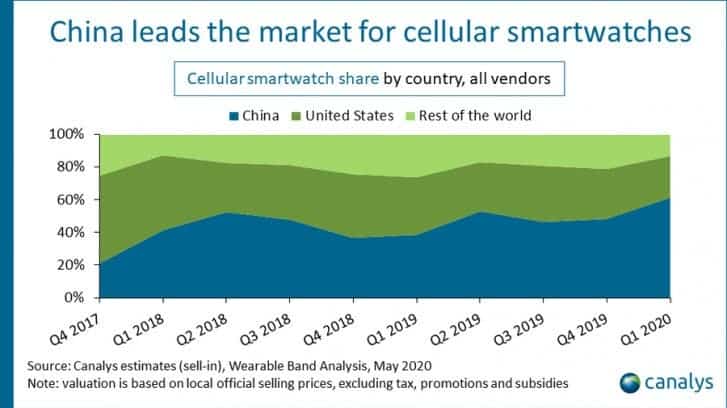 After several years, Canalys research reveals that smartwatches are finally catching customers. It may still be distant to what smartphone represent today to technology enthusiasts, but they are now much more relevant that a couple of years ago. We can attribute this change to the arrival of advanced and useful features for smartwatches. We can list features like the ECG and SpO2 readers. The latter feature has become much more important during the COVID-19 pandemic since it helps users to check the oxygen level in the body.

We are curious to see how the smartwatch segment will keep performing in the coming quarters, but we don’t expect a decline.

Next How to install Gcam (UltraCVM 5.0 mod) in all Android smartphones