Huawei is already a popular brand in the notebooks market. At least, it makes a tough competition for Xiaomi and old-timers. But it turns out this company doesn’t hide its intentions in the desktop computer market. So you should wait for the Huawei desktop PC in the nearest future. 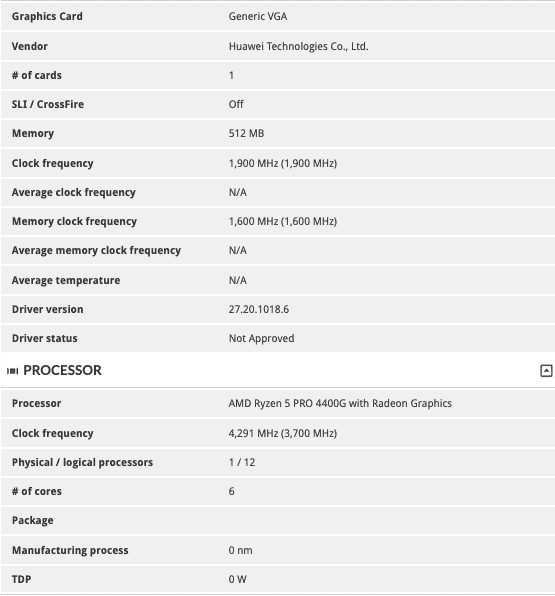 The PC component supports quad-core or eight-core ARM processors and 64GB DDR4-2400 RAM. Plus it has SATA 3.0 ports, PCIe 3.0 slots, USB 3.0 port, USB 2.0 ports a Gigabit Ethernet, etc. Therefore, it wouldn’t be too difficult for Huawei to build a Win10 on the ARM machine based on the Kirin or Kunpeng platform.

Also Read: Huawei To Enter The Windows 10 On ARM Ecosystem?

In April this year, Wang Yinfeng, president of Huawei’s consumer business tablet and PC product lines, revealed in an interview that Huawei will design high-performance gaming notebooks and desktop products.

Now, for the first time, there is a figure of Huawei desktop (for regular consumers) in the 3DMark database. We can also see the processor inside the case. It is the Ryzen APU Renoir from AMD. To be precise, it is a Ryzen 5 PRO 4400G. This is the commercial version of the aforementioned chip, which comes with 6 cores 12 threads. The main frequency varies between 3.7GHz and 4.3GHz. Also, it integrates the Vega 7 GPU, which has a frequency of 1800MHz. Moreover, the thermal design power consumption is 65W.

What we would like to point out is that the machine is not equipped with a discrete graphics card. So there is every reason to think we are dealing with an SFF minicomputer.

The same applies to the GE series of 35W thermal design power consumption.