The market of tablets may not be as competitive as it was a few years ago. Mainly due to the lack of innovation and software that is properly oriented for this kind of device. However, there are several companies still betting on large displays. Apart from usual tablets, Xiaomi also invests in LCD writing tablets for a specific niche of users. The Chinese company has crowdfunded several LCD writing tablets in the past couple of years. Some of the popular ones are the Wicue LCD writing tablet and the Mijia LCD Digital Drawing Tablet. Now, the company is crowdfunding a new kids-oriented Xiaoxun 16-inch Color LCD Tablet on its crowdfunding platform – Youpin. It comes with a big display featuring high-quality LCD and a bunch of new features.

As aforementioned, the Xiaoxun 16-inch Color LCD tablet is designed with kids in mind, however, it can actually be used by anyone. As usual, the tablet can be used for drawing and tablets. Moreover, it is able to display three colors – blue, yellow, and green. That is a major improvement over the Mijia LCD Digital Drawing Tablet which can only display one single color. The Xiaoxun comes with a steel stylus that attaches magnetically to the side of the table just like the iPad’s stylus. Another important feature is its support for pressure. In other words, users can determine the thickness of the lines drawn according to the pressure applied on the display. 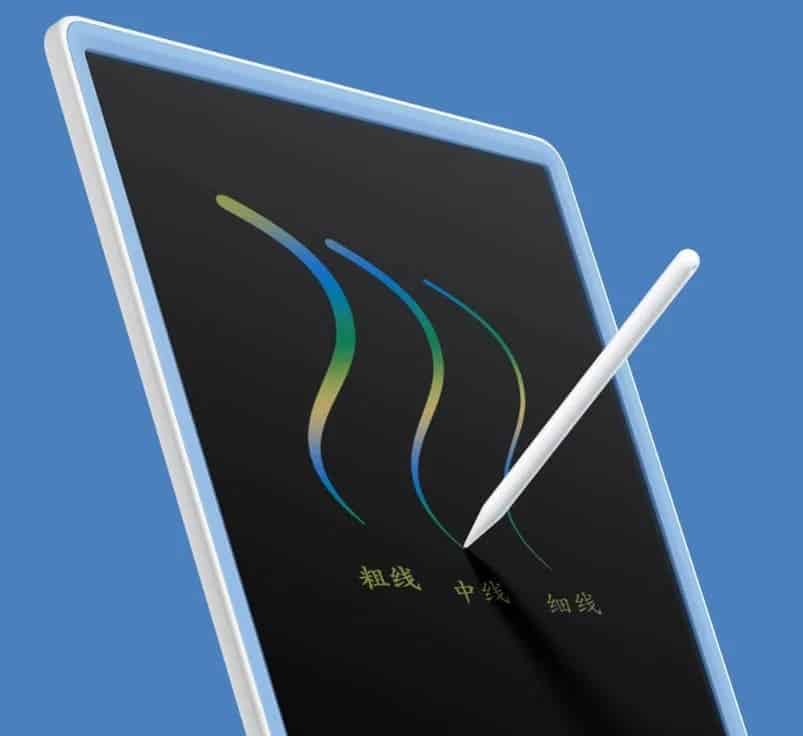 The Xiaoxun 16-inch features one button at the bottom of the screen allowing the user to quickly erase the screen’s content. Moreover, there is a lock on the side that serves to disable the erase button. This way, you won’t be accidentally erasing the content. The tablet boasts an ABS Polycarbonate build which should make it pretty light even for its size. When it comes to the total dimensions the tablet measures 36.8 x 26.8 x 0.8 centimeters but its weight is a mystery, unfortunately. Just like other drawing tablets, the Xiaoxun 16-inch Color LCD Tablet boasts a CR2025 coin battery that should last up to two years before needing replacement.

As aforementioned, this tablet has kids in mind but can be used by anyone. However, due to its kid-centric nature, it comes in vibrant colors – Pink and Blue. Users wishing to back the Xiaoxun 16-inch project will ensure one of the first units, it is available for 199 Yuan, or $28 at the Youpin store. Unfortunately, for global customers, this doesn’t seem to be a product that will be available outside of China.