Facebook recently displayed a slim VR (Virtual Reality) concept glasses whose appearance is more like a sunglasses. The current VR devices are still relatively “cumbersome”. This makes many people feel very uncomfortable when wearing them for a long time. As shown in the image, the concept ultra-thin VR concept glasses from Facebook is very thin and light. According to Facebook, the glasses use holographic optics and other technologies. The thickness of this glasses is less than 9 mm. However, this is only a concept design for now. Facebook made it clear that its current work is purely research-oriented.

Instead of the usual bulky lens, Facebook will use a thin film that achieves focusing by holographic optics. According to Facebook, this research could “deliver a field of view comparable to today’s VR headsets using only a thin film for a thickness of less than 9 mm”. Excluding the actual laser source, the total weight of the ultra-thin VR concept glasses is just 18 grams. According to the research, Facebook said “for our green-only sunglasses-like prototype, we measured an overall maximum field of view of approximately 92◦ ×69◦,”.

As of now, the only practical illumination source is lasers at specific angles and wavelengths. This is because holographic elements disperse light. Furthermore, the ultra-thin VR concept glasses prototype can only display green colour. This means that it is monochrome for now. With further engineering, Facebook believes that it can bring multi-colour to the headset. We know that laser light (colour gamut) delivers wider range of colours than LCD. In fact, its range of colours is also slightly wider than OLED. Thus, if it can be used in a head-worn system, it will be a major achievement. 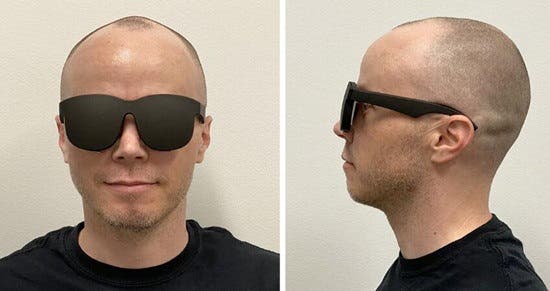 Present-day VR headsets are quite bulky, why?

The major reason for the size and bulkinesses of present-day VR headset is its optical design. Firstly, the headset needs to magnify the display over a wide FoV (Field of View). Also, it will have to focus it over a viewable distance. This requires a huge and thick lens as well as a significant gap in the design. Of course, the entire system will need housing. Well, putting all these together, the most minimal design will exceed 300 grams in weight. When you now consider some standalone headsets that require a battery, mobile chips, and other features, the weight further increases.

A couple of companies are already working to get the weight down. If the weight of VR headsets can get down to 200 grams, it will be more user friendly. Wearing a 500 grams headset on your head for one hour is very far from comfortable.