Chinese manufacturing giant, Huawei, will unveil the Huawei Mate 40 series later this year. This smartphone is Huawei’s annual flagship and we expect some innovations. In recent times, there have been speculations that the Mate 40 series may come with an on-screen camera. However, this technology is to mature yet and there is no certainty. 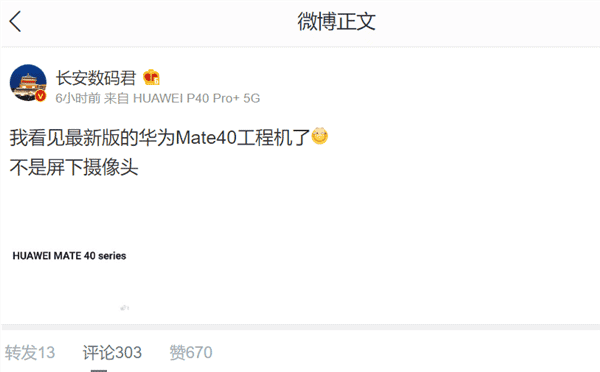 Although an on-screen camera will bring a great effect on the full-screen design, it is probably just an illusion for now and not reality. According to a popular Weibo leakster, @ChanganDigital, the Huawei Mate 40 engineering model does not use an on-screen camera.

According to recent speculations, the Huawei Mate 40 series will come with a 90Hz display. Although there are two samples (90Hz and 120Hz), Huawei cares so much about its batteries thus it will most likely go for a 90Hz display. Furthermore, the Mate 40 series will arrive on schedule. Its 5nm processor will be delivered before mid-September. According to @MobileWaferDarren, Huawei is going to need a lot of chips before the end of the year. The company will need 5nm, 7nm, 16nm, and 28nm  mobile chips. It will also need a TWS headset Bluetooth chip developed by HiSilicon. All these chips in their numbers will be available before mid-September.

Previous Xiaomi to partner with MediaTek for custom smartphone chips