According to Sony China, at the annual shareholders meeting last Friday, shareholders approved the proposal to change the company name to “Sony Group”. The change of name will take effect in April 2021. Sony is a multinational enterprise from Japan. Its main business is the development of electronic products. It was founded in 1946 by Masaru Ibuka and Akio Morita. Masaru Ibuka has a background in technology research and development while Akio Morita is good at public relations and marketing. Today, its headquarters is in Sony City, Konan, Minato, Tokyo, Japan. 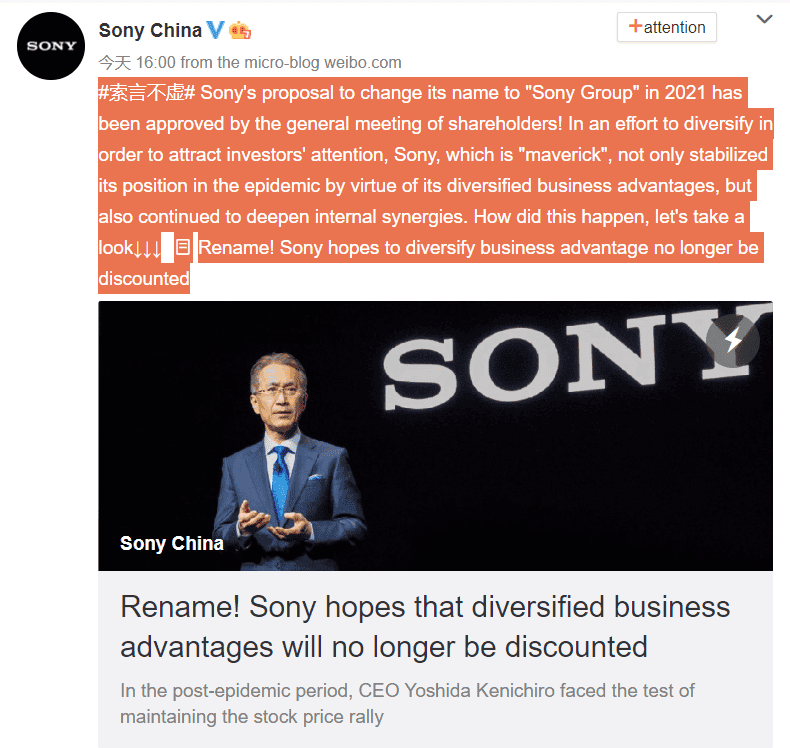 This is the first time that the company will be changing its name in over 60 years. The change of name will usher in a broader identity positioning. Like we said earlier, electronic development is the main business of Sony. The rebranding means that it will increase its efforts in financial services and other businesses. The target is to place these other businesses on par with electronics.

Sony’s CEO, Yoshida Kenichiro said: “We decided to rename the company to the Sony Group because we want to make full use of the diversity of our business portfolio to promote the development and evolution of the business.”

The Japanese company did not actually start off as “Sony”

Well, the original name of Sony is “Tokyo Telecommunications Industry Co., Ltd.”. However, this name was changed in 1958 to “Sony”. At the time, the name “Sony” represents co-founder Akio Morita’s ambition to create a global brand. Yoshida believes that the upcoming changes will lead the company to the next new stage.

For a long time, critics believe that Sony has been plagued by “diversity discounts”. Investors tend to avoid buying stocks in companies whose business lines are too diversified. In recent years, some electronics groups in Japan, especially Hitachi, have tried to abandon their non-core businesses.

However, the new coronavirus now makes people realize that Sony’s diversified model also has its benefits: games, music, and other entertainment businesses can meet the needs of consumers who are not leaving home. This can offset the losses in the sales of electronic products.

Sony currently has over 1500 shareholders

Analysts said investors are more interested in whether the company can maintain the coordinated operation of various businesses during normal times. Ryosuke Katsura of SMBC Nikko Securities stated that with the name change, Sony may become “a unique company enjoying group dividends.”

Under the current structure, it manages the operation of the entire group and controls the electronic business. After the electronic business is transferred to the intermediate holding company established under its current name, the logistics support function will be separated. The new Group will focus on human resources and financial allocation to maximize internal synergy.

Sony’s annual shareholder meeting usually has more than 1,500 people present. This year, even if the company asked shareholders not to gather, there were still 222 shareholders present.