The manufacturing industry is quite interesting and manufacturers need to be on top of their game to remain relevant. The active competition between different brands gives consumers more options. However, we all know that consumers usually have a preference. In many cases, when you want to buy a gadget, you already have a brand in mind. Sometimes, you may have a first choice and a couple of other options. According to a recent research, for Asians, the “most popular brand” is Samsung. 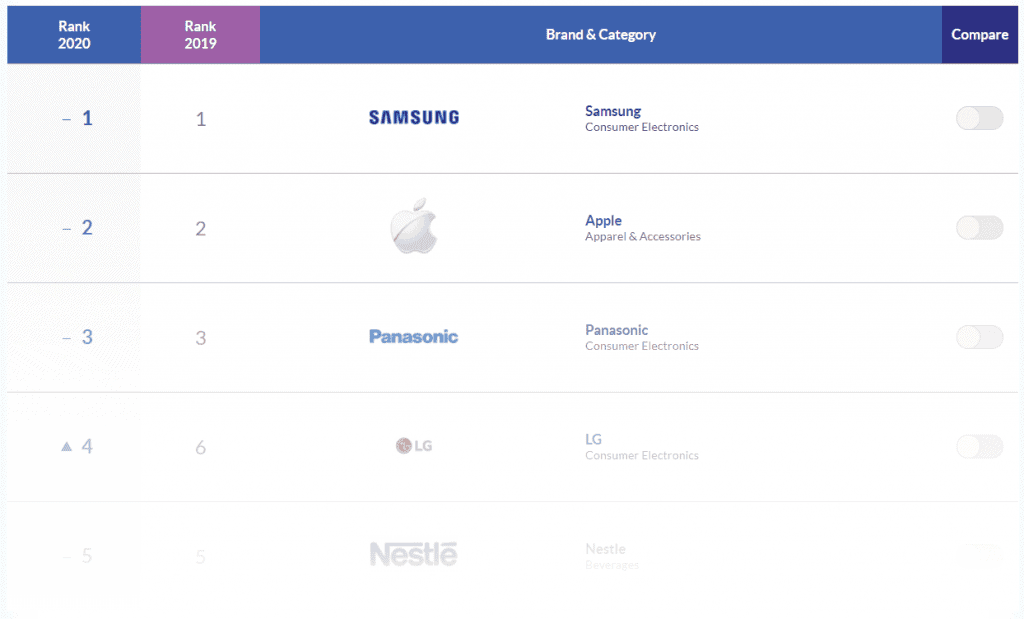 According to market research firm “Campaign Asia-Pacific” and a survey conducted by Nielsen, Samsung has been rated as the most popular brand in Asia for nine consecutive years. The report shows that Samsung remains in top position in a list that has about 1000 brands. Furthermore, the survey considered 8,400 people from 14 countries in Asia. The likes of Apple, Panasonic, LG, Nestlé, Sony, Nike, Chanel, Google, and Philips also has a high popularity.

In addition to been the most popular, Samsung was also selected as the best smart home technology brand. It is also the strongest brand overall, best smartphone brand, and most sustainable brand in Asia.

Samsung is a South Korean multinational conglomerate with its headquarters in Samsung Town, Seoul. This is a general survey thus many companies will not be able to compete against Samsung. The South Korean manufacturer has many years of consistent stable services which is very important to a survey like this. Samsung makes a whole lot of things which makes it easily popular. In addition, the company barely fails in its businesses. It is one of the most successful brands globally.

Why is Samsung the most popular in Asia? Our thoughts

Its major competitor and second place Apple is not an Asian company. Even though Apple is a multinational company that is as successful as Samsung, we can easily understand why Samsung will still beat Apple to the top spot in Asia. Its the same way Apple will seamlessly beat Samsung to the top spot in the U.S.

However, what about its Asian counterparts? The likes of LG (South Korean) Panasonic (Japanese), Sony (Japanese), or even Huawei (Chinese).

In truth, the South Korean manufacturing giant has an edge over most of these companies. It is either it has more years of experience/existence or it is more consistent. Generally, Samsung’s products are top quality and this has been proven over the years. It is not a surprise that Chinese companies are not really popular in Asia (not dominating the Top 5). Most Chinese manufacturers are really young. Industrialization in China only started a couple of decades ago.

Previous Google pledges $10 billion for India: Here are the details