It seems that there is a lot of news about Motorola devices recently. We recently talked about the Moto G9 Plus. Now it’s the Play line. The Moto G7 hit the market in early 2019, followed by the G8 the same year. Now it’s time for the next generation – the Moto G9 Play could be the first in the lineup.

Now, the results of its test in Geekbench has leaked on the Web. The good news is that the smartphone runs Android 10, unlike, for example, the Moto G8 Power Lite, which unfortunately came out in April this year with 9.0 Pie onboard.

The processor is unknown, but judging by the results, the Snapdragon 662 is waiting for us – the results are too similar to what the Moto G8 and G8 Power (not Lite) achieved. We know the chip is quite old, but it’s still a noticeable upgrade over the Helio P70M that was in the Moto G8 Play. 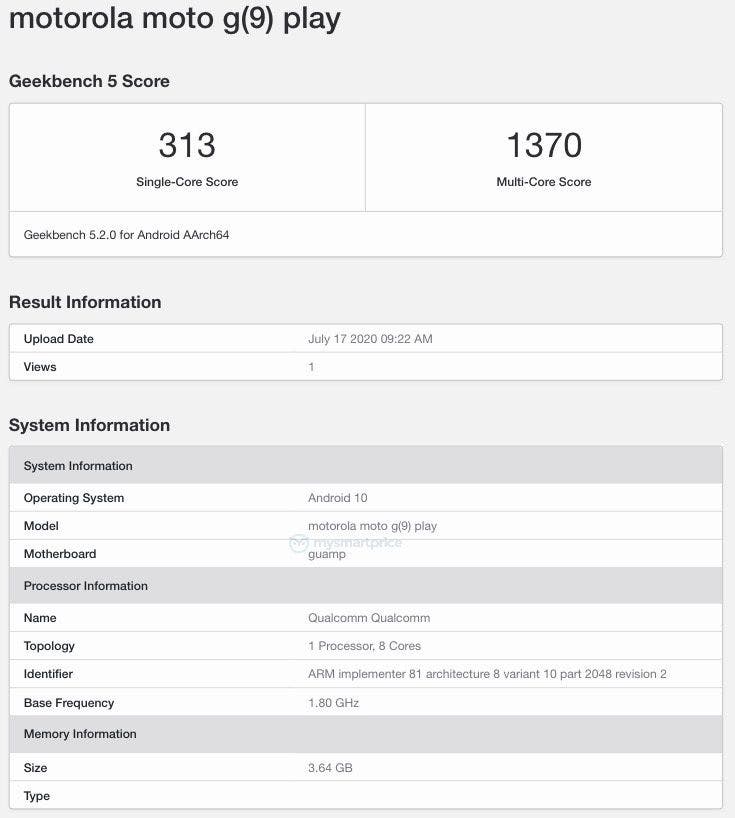 As a reminder, the G8 Play had a ridiculous 2GB of RAM, while the new model features 4GB. Of course, the top version could be used in testing, so the manufacturer can roll out versions with less RAM and a lower price.

So, regardless of whether the Moto G9 Play uses the Snapdragon 662, even the affordable version of the smartphone will get performance improvements.

Here is a reminder of the specification of the previous generation Moto G8 Play smartphone.

The phone has color options: Knight Grey and Royal Magenta. Pricing started at $240. The smartphone has arrived alongside the Moto E6 Play. Both the Moto G8 Play and E6 Play phones have arrived running Android Pie, feature a rear-mounted fingerprint scanner and pack, feature gradient, eye-catching colors, and pack 4000mAh and 3000mAh battery, respectively. They made their first debut mainly in India, Brazil, and the UK.

Next Samsung Galaxy M31s to Officially Launch on August 6th