OnePlus is all set to launch its much-awaited mid-range flagship smartphone dubbed OnePlus Nord on July 21. Ahead of the official launch, the device has now appeared on the GeekBench for the benchmarking purposes. It is worth noting that we’re looking at an Indian variant of the device. Thanks to the GeekBench listing, we now know that the Indian variant will have the same specs as that of the global one.

OnePlus Nord Indian variant has surfaced on the GeekBench listing with the model number OnePlus AC2001. As per the listing, the device comes with an unknown Qualcomm chipset with eight cores and base clock of 1.80GHz. This is indeed the Snapdragon 765G chipset. The SoC will be paired with a massive 12GB of RAM and Android 10 operating system. Of course, the software will have OxygenOS custom skin on top. 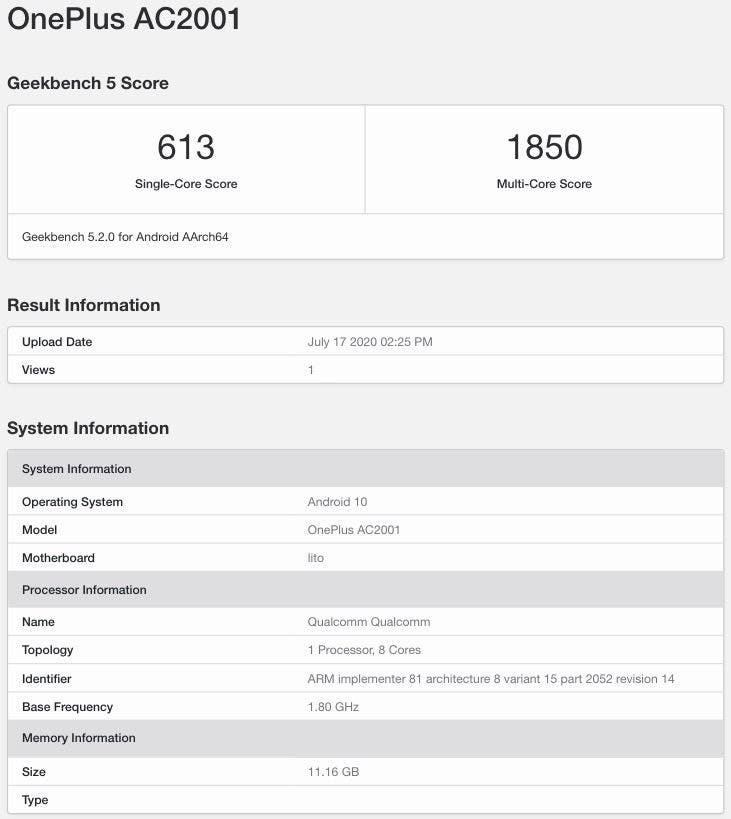 Coming to the benchmark scores, the device managed to score 613 in the single-core performance and 1850 in the multi-core benchmark test. For those who’re unaware, the device will also come with 8GB RAM. We recently came to know that the device will arrive with a total of six cameras – four lines on the rear and two on the front. The quad rear camera module will feature 48MP primary sensor, an 8MP ultrawide lens, 5MP depth lens and a macro sensor.

Considering other previous leaks and rumours, OnePlus Nord is equipped with a 6.44-inch AMOLED panel with 90Hz refresh rate, 2400 x 1800 pixels and a 20:9 aspect ratio. The device will be powered by 4,115 mAh battery with the support of 30W fast charging tech. We will also see NFC along with Bluetooth 5.1.

Since this is a mid-range flagship device, we’re expecting the smartphone to fall under the $450 price tag. That is the primary reason why the device is receiving huge attention in the community. With its latest offering, OnePlus has now moved from being a ‘Flagship Killer’ to just flagship company. The upcoming OnePlus Nord will help the smartphone maker to still cater to the mid-range segment. In turn, this will help the brand to not lose the enthusiast consumers who it used to cater back in the days.

With that said, the official launch will take place on July 21 with the help of AR technologies. We are also expecting the brand to launch its first-ever truly wireless buds dubbed OnePlus Buds.