Realme has just two years of existence but already managed to become one of the most important smartphone makers in the world. The company is one of the firms that release smartphones more often, and this month will not be an exception. The Chinese brand has just announced a new Realme 6i for India that will become officially available on July 24. This device is a rebranded Realme 6S featuring the excellent Helio G90T chipset. This is coming just a few days after the launch of Realme C11 in the country. Now, we know that there will be another Realme device coming before the end of the month. It’s the Realme C15 packing a 6,000mAh battery that will go official on July 28 in Indonesia.

The Realme C15 is the smartphone that was teased last week with a 6,000mAh battery. Now, its arrival in Indonesia is pretty much confirmed for July 28 at 1 PM local time. Besides the device’s name, the poster also confirms how the smartphone will look. If you’re familiar with Realme design, then, we have to say that this device brings some drastic changes to the camera setup. Instead of the usual horizontal arrangement, the Realme C15 will pack a square-ish camera island comprising four cameras just above of a single LED flash. The rear also serves as a house for a fingerprint scanner and the Realme logo sits in the bottom-left side of the back panel. The poster confirms blue and silver color options. 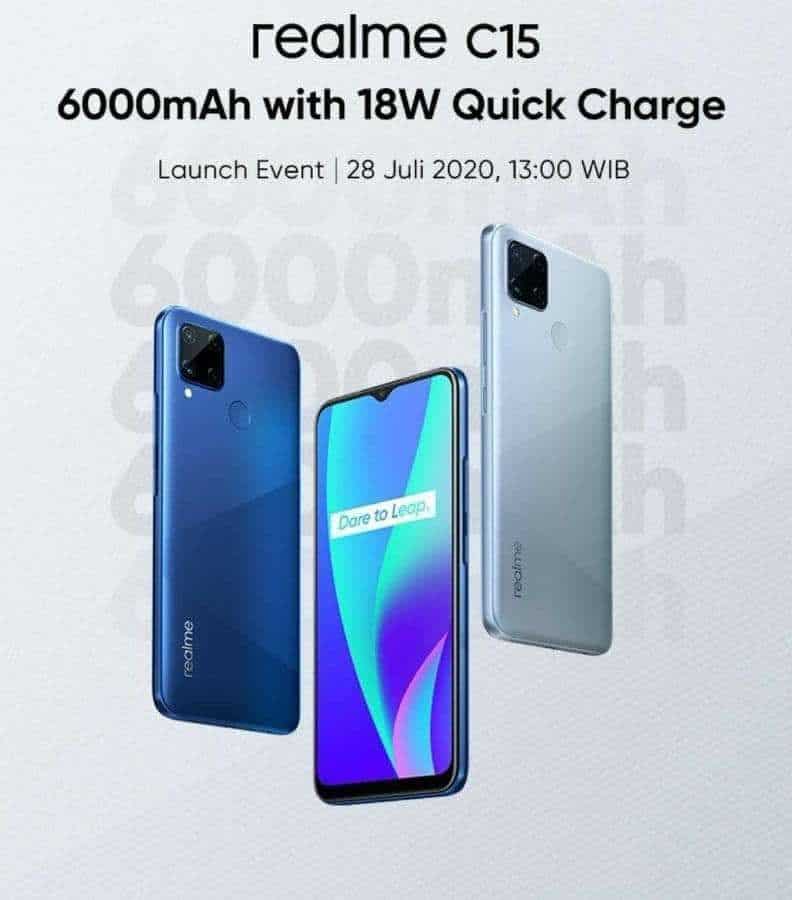 On the front, we probably have a panel that is bigger than 6-inches and has a waterdrop notch. The teardrop arrangement for the selfie snapper is becoming rare among Realme smartphones. The company has driven in the punch-hole trend. The poster also confirms 18W fast-charging which also makes us assume that there is a USB Type-C port. The remaining specifications remain unknown, however, it’s hard to assume that Android 10 will be present with Realme UI running on top. Moreover, we likely have a 3.5mm headphone jack here and the handset should have, at least, 3GB of RAM and 32GB of storage.

It’s sad to see this big battery coming with just 18W fast-charging. Realme has recently unveiled a 125W UltraDart Charge Technology, it would be perfect to replenish a battery of this pedigree. However, we’re not holding our breath to see this insane fast-charging technology coming with a device that sits between the low-end and mid-range segments. For the time being, we assume that this 125W charging will be exclusive to some of the Realme flagships.