Asus unveiled today a new smartphone from its Republic of Gamers ranges today dubbed Asus ROG Phone 3. The device still is free, but DxOMark’s Audio already reviewed the device’s audio performance. The platform is well known for its camera review, but apparently, the image review isn’t ready yet. However, if you care for having a good audio performance in a smartphone, then you’ll be glad to know that the new gaming phone ranks second with an amazing audio performance. 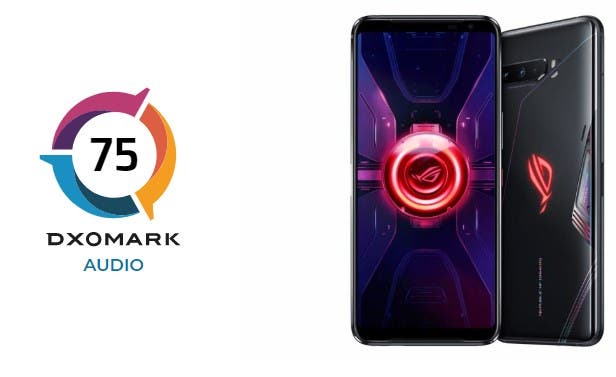 DxOMark rate the ROG Phone 3 high with a score of 75. The device is only outperformed by the Xiaomi Mi 10 Pro. The test involved measuring the performance in terms of recording with its built-in microphones. Moreover, it proves the audio playback through the phone speakers. When it comes to audio, the ROG Phone 3 is a generous smartphone. The handset has stereo front-facing speakers with Dirac Research immersive audio technology. Moreover, it boasts 4 microphones for 3D recording.

Unfortunately, the device doesn’t come with an audio jack but some of the accessories made for it allow you to use and audio jack. However, there is a 3.5 mm to USB-C adapter in the box allowing you to make use of any 3.5mm headphones you have.

A solid audio performance in a powerful gaming phone

The gaming phone scores 75 points on the playback audio tests. It delivers a strong bass that helps with frequency balance and dynamics earning it a score of 72 in both categories. Its volume is also said to be pretty good to the point that you can’t block out the speakers when watching movies, playing games, or listening to some audio files. DxOMark is also happy with the recording capabilities of the gaming handset. It scored 74 points on this category. The ROG Phone 3 now sits among the best smartphones tested for audio recording. Volume is consistent across all scenarios test and distortion is practically unnoticeable.

The conclusion states that the ROG Phone 3 successfully outperforms its predecessor in almost all scenarios. You can check more details reading DxOMark full review in the source link. Now, we are curious to check the review for its camera performance. However, we’re not expecting the same level of quality in the camera. After all, gaming phones aren’t well known for its camera capabilities.

Previous How to install Gcam 7.4 mod in all Android smartphones