Vivo’s S series of smartphones is quite popular in countries like China and India for crazy selfie cameras it sports with every sensor. Hence it is a no-brainer that the company would want to improve it further and if the latest leaks are anything to go by, it might turn out to be true as the next iteration, the Vivo S7 5G will have a whopping 44MP selfie shooter at the front. 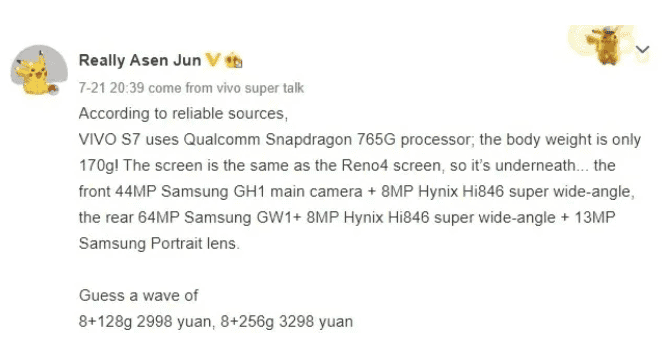 Shift from Exynos to Qualcomm

A tipster on Weibo has given away more than just the cameras of the phone. According to his sources, Vivo S7 will retain the 5G connectivity as its predecessor but with Qualcomm Snapdragon 765G SoC. This is a u-turn from the Exynos 980 5G  on Vivo S6 5G and at least on paper, Qualcomm’s SoC will have an upper hand over the Samsung counterpart.

Regarding the exterior, it is expected to retain the similar design language to that of Vivo S6 which had a circular camera layout on the back. Further, he has stated that the device will have a slightly reduced weight of 170 grams and borrow the display from Oppo’s Reno 4.

This is understandable considering both share resources being a sister brand and going by his leak, we think it will have the Standard Reno 4’s flat display with a dual-punch hole for cameras.

Breaking its own record with a 44MP sensor 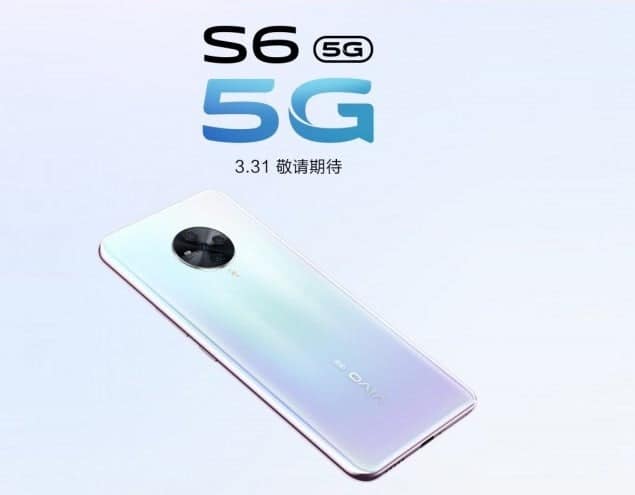 Addressing the elephant in the room, he says that Vivo S7 5G will have Samsung’s 44MP GH1 and an 8MP Hynix Hi846 super wide-angle sensor combo at the front. Hence, the selfie shooter not only will an upgrade design-wise, but a huge bump from the 32MP single sensor found on the Vivo S7 5G.

The rear camera according to him will have cut in one of the quad-cameras found on the S6. He says the Vivo S7 will have 64MP Samsung GW1, 8MP Hynix Hi864 ultra-wide, 13MP Samsung’s portrait (Telephoto) lens. This is a welcome change as the saying goes in the industry, the number of sensors doesn’t define the quality and if this turns out to be true, Vivo has made the right choice here.

Regarding storage, it is expected to sport an 8GB RAM and 128 and 256GB storage options. The tipster has also quoted a starting price of CNY2998 for the former and CNY3298 for the latter variant. Let’s wait for more details in the coming days.