Google Play Console has information about the LG Q92 5G smartphone – a mid-range device with support for fifth-generation mobile networks. The official announcement of the new smartphone may take place in the current quarter.

The device has a resolution of 2400 × 1080 pixels (Full HD +) and a pixel density of 420 PPI. Thus, the screen measures approximately 6.3 inches diagonally. In the center at the top of the screen, there is a small hole for a single front camera. 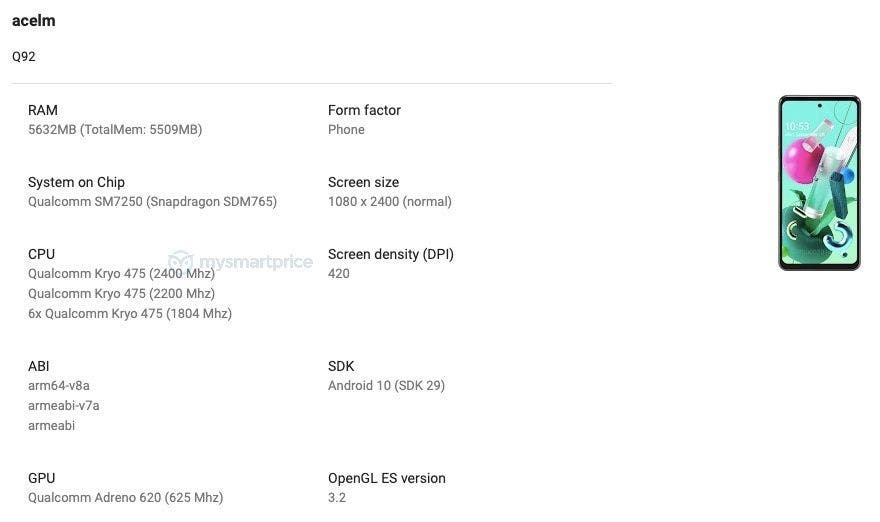 It will be based on the Qualcomm Snapdragon 765G processor. This product is configured with eight Kryo 475 cores with a clock speed of up to 2.4 GHz, an Adreno 620 graphics unit and an X52 5G modem.

It is known that the smartphone carries 6 GB of RAM onboard. The operating system is Android 10. The above image indicates the presence of a side fingerprint scanner.

According to TrendForce forecasts, about 1.24 billion smartphones will be sold worldwide this year. Of these, approximately 235 million units will be 5G devices. Thus, the share of such devices in the total supply volume will be 18.9%.

It is worth to mention that LG has surprised most of its costumes this year with the release of a new smartphone dubbed LG Velvet. The device came as a massive overhaul in terms of LG phone design. Moreover, it dethroned the LG series and for the first time, we didn’t have an LG G smartphone. A few years ago, LG was among the most relevant smartphone makers. However, it failed to keep pace with the competitive falling with non-innovative smartphones. This year, the company introduced the LG Velvet in a bid to bring some fresh air for its struggling smartphone division. We’re not sure if the handset will be a huge success, after all, it packs mid-range specs but it costs like a flagship.