Since the release of the Oculus Quest VR headset, its sales have been pretty phenomenal. In fact, it is never easy to get this headset on the shelf for obvious reasons. The Oculus Quest was released sometime last year and there is now information about a possible successor. According to WalkingCat, a popular tech leaker on Twitter, an Oculus headset is coming. Unfortunately, there is no accompanying message to the tweet. Thus, all we have is just the render. This device could be a lighter model or a complete upgrade of the Oculus Quest. For now, we call it Oculus Quest 2 but there is no official information on the nomenclature of this device. 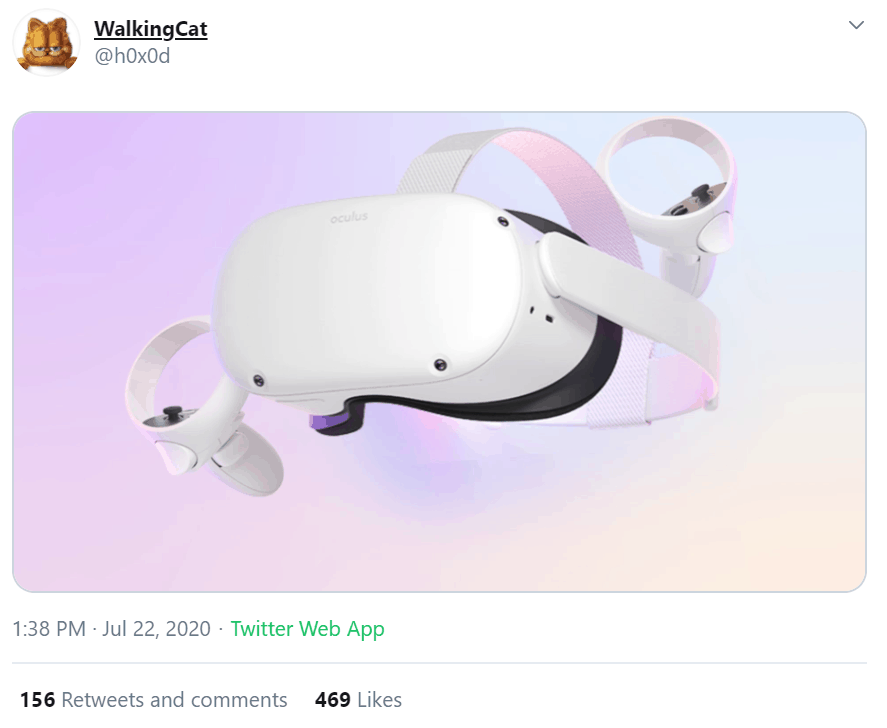 In fact, this could be the first leak (official or unofficial) of this headset. The image looks similar to the Oculus Quest with some differences of course. It is an all-white device with a touch of a few other colours.

Oculus Quest 2 is similar to the original Quest

Apart from a few differences, this device seems like the Oculus Quest. The new white colour, smoother fabric material, thinner head strap, and lack of IPD slider are some of the noticeable differences. Nevertheless, this device still uses the same four tracking cameras as its predecessor. Furthermore, the controllers also look the same and the battery is hidden on both sides.

According to a recent report, Oculus division is developing a new version of its Quest standalone headset. The report claims that this new version comes with multiple models. Furthermore, it says that the new version of the VR headset will be smaller and lighter with 4 cameras. It will also support Oculus Link, have a higher refresh rate, and provide more realistic content.

According to its official website, Oculus Quests sold more than 500,000 units in the past year. Oculus later removed the Go standalone unit from it, so Quest was able to provide a more complete package at a lower price. If this truly is the Oculus Quest 2, we expect this device sometime next year. The possibility of it arriving this year is very slim.

Next The U.K. needs to protect Nokia and Ericsson due to Huawei ban