A Vivo smartphone boasting the model number V2006 surfaced on GeekBench Benchmark listing with a Snapdragon 765G SoC and 8GB of RAM. Worth noting that it also runs Android, but that’s not a surprise for a device released this year. Interestingly enough, the same V2006 received Bluetooth SIG certification in the last month under the name of Vivo X60s 5G. It was certified with the Danish UL (Demko), revealing support for 11V/3A 33W fast-charging. 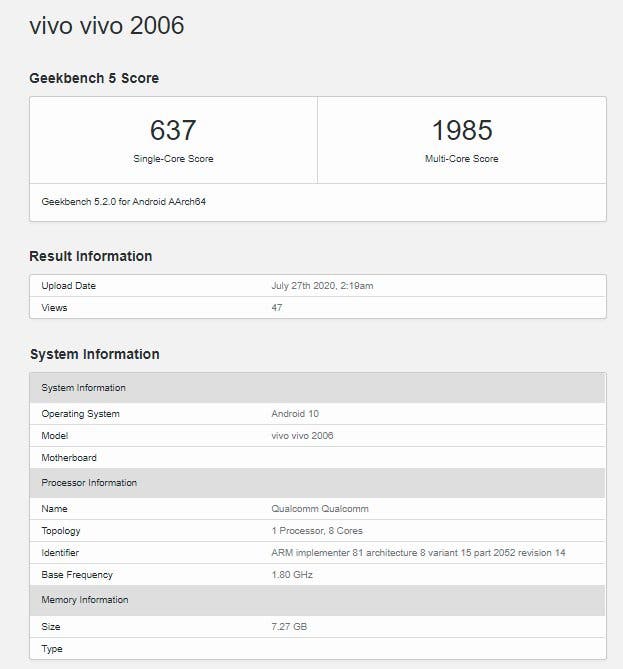 A few months ago, Vivo announced that it would expand its offer of 5G smartphones with cheaper devices. During the past few months, the company has been honoring this promise with many devices boasting 5G capabilities. When it comes to this new Vivo X60s 5G there are some controversies. The phone boasts the 765G and has 33W charging which coincides with both the Vivo X50 and X50 Pro. Rumors are pointing to this being the global counterpart to the China Vivo Z6 5G with a downgraded fast-charging tech.

#vivoX50series was launched yesterday, but it seems like the brand is already on its successor😮 i.e. vivo X60 series
As the "vivo X60s 5G" clears Bluetooth SIG.
Source- https://t.co/KFG3ydqfy0 pic.twitter.com/zcwqwO9FTI

The handset achieved 637 points in the Single-core tests and 1,985 in Multi-Core tasks which is pretty on par with results achieved by this processor.

While the Vivo X60s does not come, the company still has a 5G phone to be revealed in the next week. Curiously, it also ships with the Qualcomm Snapdragon 765G SoC. The phone will be dubbed Vivo S7 5G and will ditch the Exynos 980 SoC found ou nits predecessor. The phone has a 6.43-inch AMOLED and curiously will employ a wide-notch solution. This is used to employ a 44MP Samsung GH1 and an 8MP Hynix Hi846 super-wide-angle sensor as selfie cameras.

On the rear, the handset will have a squircle design to employ a 64MP main shooter, 8MP ultra-wide, and a 13MP Telephoto lens. According to reports, the phone will come with 8GB of RAM and 128GB / 256GB of Internal Storage.

The company recently took to Weibo to announced that the launch will happen at 7:30 PM China time on August 3. Along with it, the company also confirmed that the phone will arrive in a very thin form factor. It will also be a light-weight phone with a selfie-centric approach. The device is already up from pre-orders on suning.com and may hit a price of CNY 2,998 in China ~$428. We will know all details about the company’s next 5G phone the next week.

Next VIVO Y70s Got A New Color Option of Extracted Silver