Today, Sensor Tower released the Top 10 most downloaded mobile apps worldwide for the month of July 2020. According to its report, Douyin and its global version, TikTok ranks first in the global non-gaming app downloads. This app has over 65.2 million downloads, an increase of 21.4% over the same period in 2019. Interestingly, the United States is the market with the largest download volume this month. The U.S. alone accounts for 9.7% of the total downloads followed by Indonesia with 8.5%. 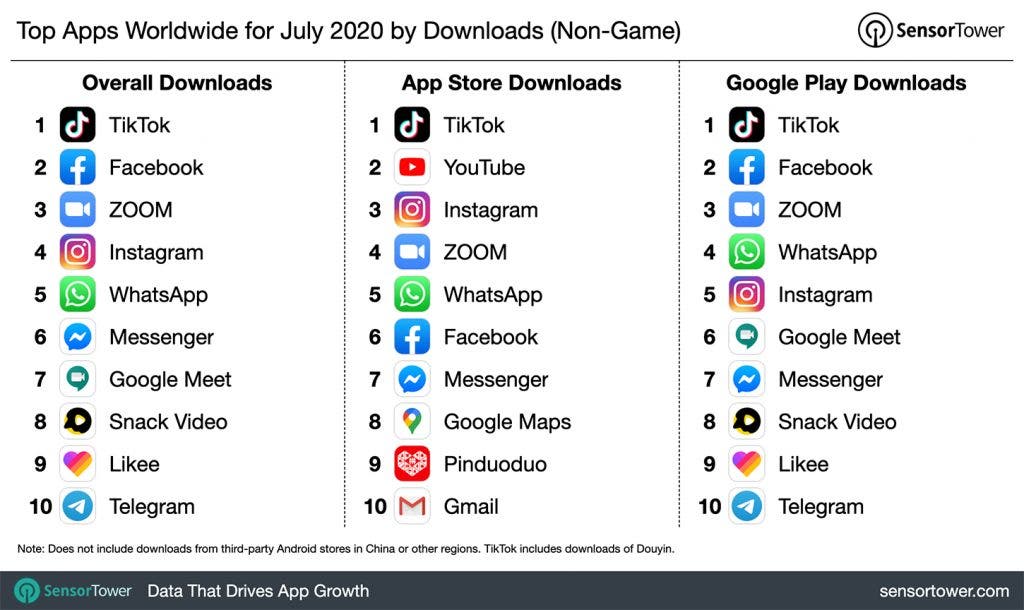 Facebook ranks second with 53.6 million downloads. This app has 23.1% downloads from India while 9.1% of downloads are from Indonesia. The other three apps in the top five are Zoom, Instagram, and WhatsApp.

A huge chunk of TikTok downloads used to come from India with the U.S. following behind. After TikTok was removed from India’s App Store and Google Play on June 29, Snack Video entered the top 10 global mobile app download list for the first time. It currently ranks 8th, surpassing another short video app Likee. Snack Video received 28.8 million downloads in July, which is 3.7 times the 7.8 million downloads in June.

It is important to note that Sensor Tower data only calculates the first installation from the App Store or via Google Play. It does not consider multiple installations from the same account on different devices. Furthermore, the download data merges multiple versions of the same application, such as Facebook and Facebook Lite.

Read Also:  TikTok India Relaunch On The Cards After Two Years Of Ban

Microsoft and Twitter are in negotiations to buy TikTok

Presently, there are ongoing negotiations by some American company to buy-out TikTok. The deal will not capture TikTok’s entire business. It will involve TikTok’s business in the U.S. and perhaps a few other countries. As of now, Microsoft has officially confirmed that it is in talks with TikTok over a possible purchase. Most recently, Twitter has also shown its interest in the Chinese short video platform. Whatever the case may be, the deal will be done on or before September 15th. As of now, there are speculations that the deal will be worth between $20 billion and $30 billion.

TikTok India Relaunch On The Cards After Two Years Of Ban