Yesterday, Xiaomi made a furor by launching the industry’s first mass-produced transparent TV. The Xiaomi Mi Transparent TV was officially released at a price of 49,999 yuan ($7198). Also, it immediately went on pre-sale after the launch. But it took only one second to completely sell out the first batch. Today, JD has had to restock it again. 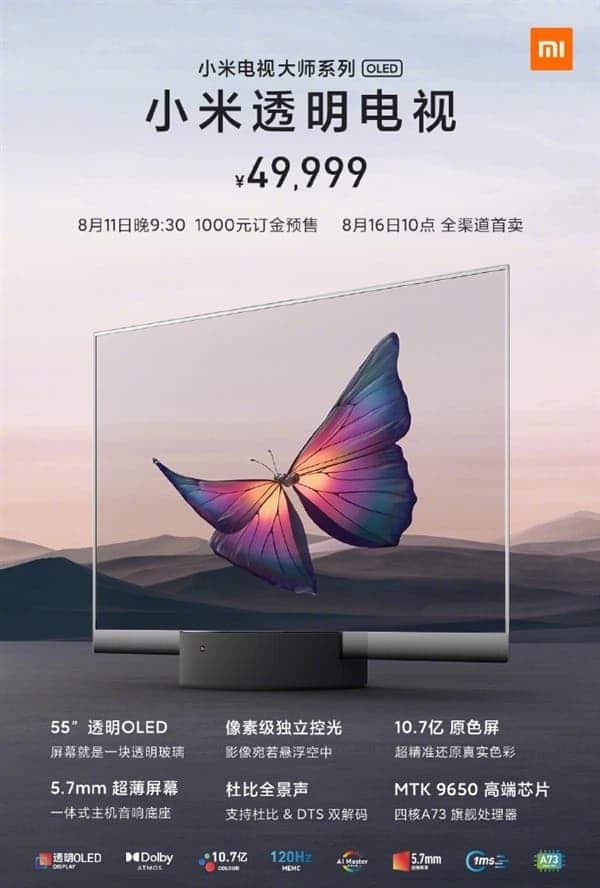 Under the hood, it sports a MediaTek 9650 customized TV chip. The latter has a quad-core A73 processor architecture and an integrated Mali-G52 graphics card. it improves the performance by 30% compared with the previous generation. Independent neural network computing unit supports intelligent scene recognition. At the same time, there is an AI ​​Master engine built-in, which can enhance the image performance in all aspects.

The Xiaomi Mi Transparent TV removes the traditional TV back panel, and the screen almost disappears. So it is a just a piece of transparent glass. When you light it up, the incredible ‘floating’ images and imaginative interaction methods bring the scenes seen in science fiction movies into reality.

Going back even further straight to 2017, LG introduced its transparent concept television as well at CES. Lastly, Samsung brought its own version as well in the year 2016. With that said, tech companies are working on these transparent OLED panels for a long time. While their version remained a mere concept or prototype, Xiaomi ended up launching its own mass-produced one. We’ll have to wait and see whether this new Mi TV Lux Transparent Edition makes it way globally or not.

How amazing is it?

Next No, Neither the Mi 10 Ultra nor the K30 Ultra are Coming outside China!