It is already revealed that the Chinese manufacturing giant Huawei is all set to release a couple of new products in the upcoming weeks. While we already have information on the Huawei FreeGo portable Bluetooth speaker as well as the Huawei EyeCare II. Now, there are reports that the company is working on a new MateBook. According to @长安数码君, a popular Chinese leakster; the upcoming Huawei Matebook X will be released in four new colours; namely Frost Silver, Interstellar Blue, Green, Mountain Daisy and Cherry Blossom.

The same person also reported that the upcoming Matebook X won’t be cheap in pricing, although the price won’t exceed a maximum of 10,000 yuans. Based on previous leaks, the Huawei MateBook X will use an aluminium alloy body, CNC drilling and cutting technology at the corners, a 3:2 13-inch 3K full screen with a net weight of about 1.05kg and a thickness of about 12.5mm.

Additionally, the new machine may be equipped with latest 10th generation Core i5/i7 processors and the MX250 graphics card, equipped with up to 16GB memory and 512GB SSD storage, The display is rumoured to support 100% sRGB wide colour gamut, use a hidden front camera, have built-in dual speakers with support for Dolby Atmos and two full-featured Type-C ports for connectivity. 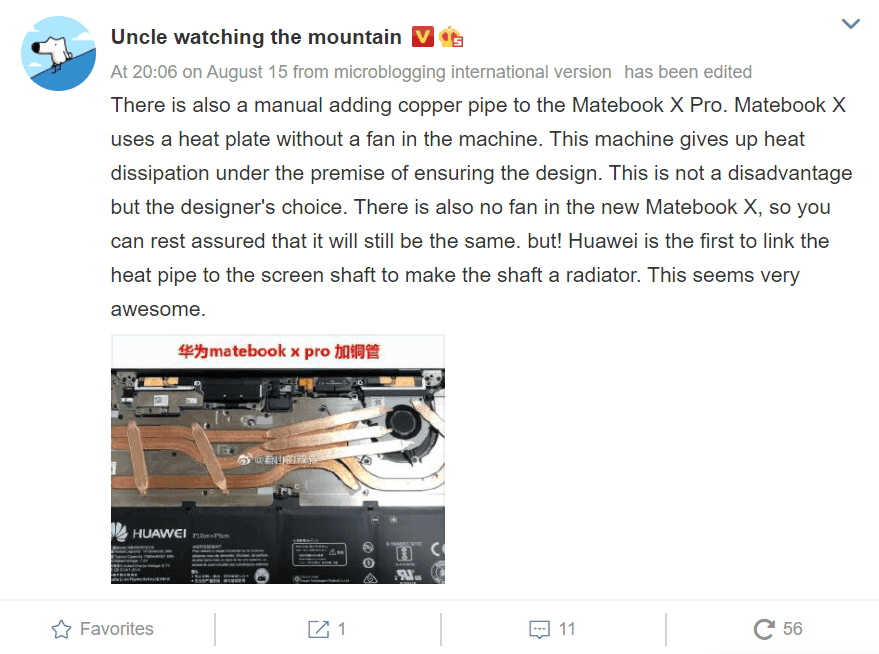 According to the report, the new MateBook X does not have a cooling fan like the previous generation. Huawei becomes the first company to connect the heat pipe to the screen shaft. The device will then use the shaft as a passive radiator. Since this is a first of its kind, we do not have information on the performance of this device.

According to @看山的叔叔, the new Huawei MateBook X will also come with a 13-inch screen, and the touchpad is pressure-sensitive. As of now, the leaker can not confirm is there is a linear motor. However, Huawei’s new flagship is thin and light. As of now, there is no information on the complete pricing of this device. Nevertheless, in a few days, we will have all the details of this flagship notebook. There are reports that Huawei and Honor will release other devices at the launch conference. We will have to wait and see what the company has to offer. It adopts a fanless design and is equipped with a FreeTouch pressure trackpad with built-in NFC.

There are some reports that this year’s MateBook X 2020 model will be officially released on August 19.