Chinese manufacturer, OnePlus, positioned its self as a flagship smartphone brand. However, this strategy seems not to be enough for the company and it is now shifting grounds. This year, it has already released the OnePlus 8 series which is a flagship lineup. However, last month, the company also unveiled the OnePlus Nord which is its first-ever mid-range smartphone. Now, there are reports that OnePlus will soon release another mid-range smartphone. At present, a new OnePlus phone just got TÜV Rheinland certification. The certification confirms that this smartphone will support up to 18W fast charging (9VDC, 2A). 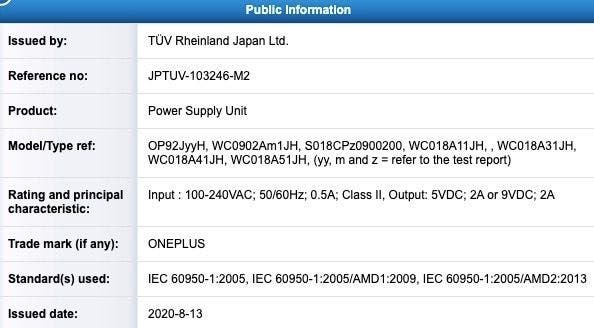 The Qualcomm Snapdragon 660 SoC is a three-year-old processor (May 2017 release) that uses the 14nm process. Obviously, OnePlus is preparing a budget device that it will use to capture the market once again.

Within a month, it launched its first mid-range model, OnePlus Nord, in the Indian and European markets. OnePlus co-founder, Carl Pei, confirmed that OnePlus will bring more mid-range models to the North American market. Well-known leakster @Max J. stated that OnePlus is developing two mid-range models internally, called “Billie 1” and “Billie 2”. Previously, a developer found a new machine code-named “Billie” in the code of OxygenOS 10.5. Its chipset is SM6350 which is the code of Snapdragon 690 chipset.

This is about all the information on the upcoming OnePlus mid-range device. However, with the certifications rolling in, there will be more info on this smartphone in the coming weeks.

Next OnePlus TV - 32Y1 and 43Y1 - getting OTA2 update with improvements