At today’s Huawei notebook product launch conference, the Chinese manufacturer released several notebooks such as Huawei MateBook X/13/14. In terms of software, Huawei incorporates a cloud space PC client on MateBook X. This is the first time that a notebook from Huawei will be using such a PC client. The Huawei Cloud Space PC client supports one-click upload of files, freeing up the local space, and also supports synchronizing files in the disk. Furthermore, it also supports automatic synchronization of multiple devices. This gives room for more efficient office work. 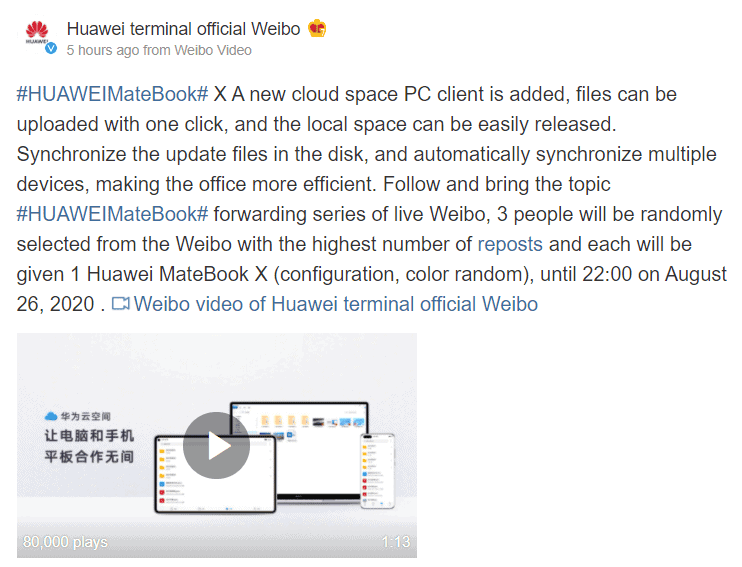 The Huawei MateBook X sports the tenth-generation Core low-voltage processors. The top version comes with the i7-10510U chip, which has 4 cores and 8 threads. The clocked speed is up to 4.9GHz. The laptop is available in 8GB/16GB memory and 512GB high-speed SSD hard drive options. It is worth mentioning that MateBook X is equipped with a passive cooling device. According to the official, MateBook X pioneered the heat-conducting shaft technology. It features an ultra-thin VC heat dissipation module and built-in 3+6 multilayer graphite sheets.

The Huawei MateBook X uses the industry’s first floating full screen with a resolution of 3K and touch support. The pixel density is as high as 278ppi. It also reached a high screen-to-body ratio of 90%. At the same time, the screen ratio is 3:2, which is smaller than A4 paper and as light as 1kg. The 3000 x 2000 resolution LTPS ultra-high-definition display has a 100% sRGB color gamut, and a contrast ratio of up to 1500:1. The 3:2 screen is called the productivity screen because it can display more content under the same size. When working with tables, PPT, Internet or even watching videos, the 3:2 screen can provide a more complete picture. This increases office efficiency greatly.

Also, Huawei MateBook X introduced the pressure trackpad design for the first time. It comes with a full-area perception of press vibration feedback. And it has built-in Huawei sharing tags. The company said that no matter where you click, the touchpad can respond sensitively. The Huawei NFC can be used in the touchpad as well. It is more convenient when using multi-screen collaboration.

The Huawei MateBook X has a USB-C port on each side of the fuselage. In the box, we can find a 65W pocket charger. The latter weighs only 94g and supports fast charging or super-fast charging for multiple devices. The laptop provides 9 hours of local video or 9 hours of document processing.