The commercialization of 5G technology is already spreading through different parts of the world. However, 5G network speed depends on a number of factors from baseband to equipment type. The focus on low-band deployment led the United States to rank bottom in an Opensignal analysis of 5G typical data rates in 12 countries. This list is extended to 12 in order to accommodate the U.S. and U.K who are in eleventh and twelfth positions respectively. 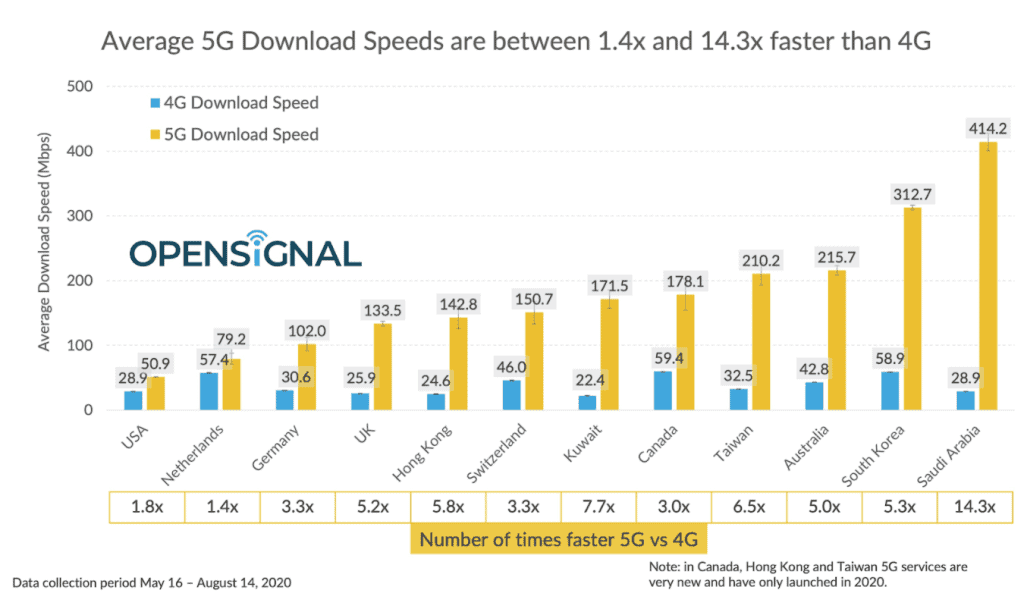 The average downlink rate in the United States is 50.9mbps. This is significantly lower than the 414.2mbps of Saudi Arabia, which ranks first. Opensignal pointed out that the focus on low-frequency deployment is a factor affecting the U.S. 5G network speed. Operators tend to focus on coverage rather than network speed, except for Verizon. Due to the use of the millimeter-wave spectrum, the operator has a high evaluation in the previous analysis.

However, Opensignal pointed out that the low-band spectrum provides “excellent availability and coverage” relative to high-band. This results in the United States ranking fifth in the time it takes to connect to 5G.

The U.S. focuses on availability rather than speed

Among the 4G/5G integrated data rates announced by Opensignal, the United States suffered another blow. It ranks second at the bottom with a rate of 33.4mbps. Saudi Arabia once again topped the list, with a typical rate of 144.5mbps. In Opensignal’s survey earlier this year, the United States also ranked bottom among eight countries, becoming the only country with a 5G rate lower than Wi-Fi. In the US the low-band 5G services of T-Mobile and AT&T are helping to drive a high 5G Availability result. T-Mobile U.S.’s very recent launch of standalone access 5G — where a phone no longer needs to connect to 4G in order for 5G to work — should help 5G services in the future.

The full-scale commercialization of 5G commenced just last year. This means that we have almost a decade to go before the arrival of a new generation network. In a number of countries, we continue to see 5G services target smartphone users launching for the first time.

In delivering high levels of 5G availability, smaller nations like Kuwait or Hong Kong have an advantage over the likes of Australia or the U.S. However, there is still a lot of time for the development of 5G services. In the coming years, there will be a significant change in the statistics.

Previous TCL is preparing to launch a smartphone with invisible cameras