Since the beginning of last year, we have seen a preponderance in the commercialization of the 5G network. One of the major advantages of the 5G network over 4G is the network speed. However, as the commercialization of 5G continues, different countries have different 5G network speeds. In fact, different carriers in the same country have different 5G speeds. This article looks at the Top 10 countries with the highest average 5G download speed. Opensignal has analyzed the real-world 5G experience of users across mobile operators in a number of countries globally. Its analysis looks at countries in Asia (excluding China), Europe, the Middle East, and North America. Here are the top 10 countries with the highest 5G download speed. 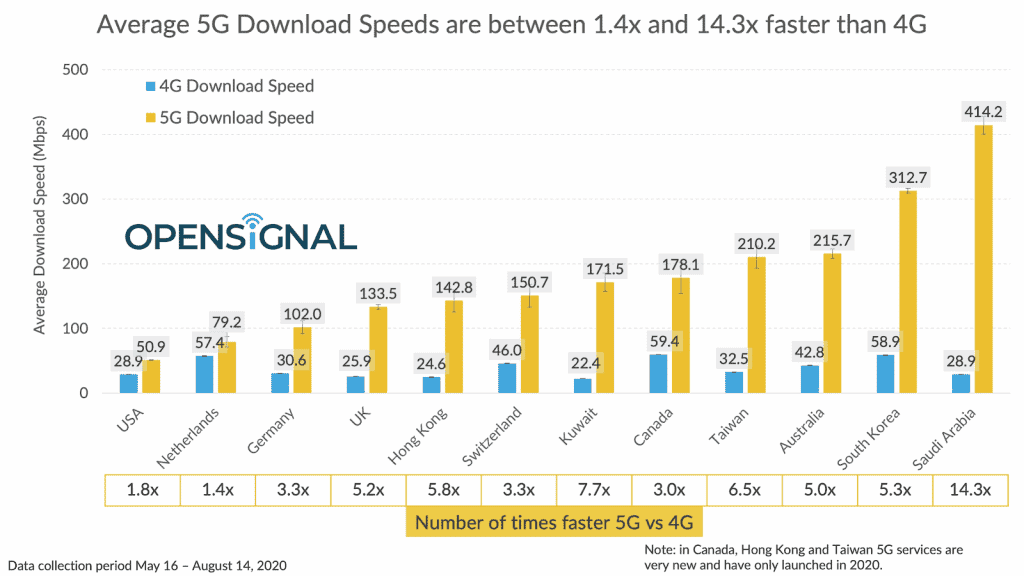 Back in June 2019, STC Group officially announced the launch of 5G commercial services in Saudi Arabia. The company became the first operator in the Kingdom to provide this service commercially and make it available to customers in a number of cities in the Kingdom. Globally, 5G users in Saudi Arabia see the fastest overall average download speed. The Western Asian country records a download speed experience of 414.2 Mbps.

South Korea is the first country in the world to commercially roll out 5G on April 3, 2019. At the time, SK Telecom Co., KT Corp., and LG Uplus Corp. all deployed 5G networks across the country. Presently, about 85 of more than 100 cities in the country have the 5G network. In addition, as of April 2020, South Korea has over six million 5G subscribers. So far as 5G download speed is concerned, South Korea is in the second position with an average download speed of 312.7 Mbps.

Although 5G commercialization in Australia commenced in 2019, only select cities have this network for now. Telstra is the first carrier in Australia to roll out its 5G network. In March 2020, Vodafone switched on its first 5G tower in Parramatta, New South Wales, and is continuing its rollout throughout 2020. Presently, 5G is only available in over 10 cities and towns across Australia. Some cities with 5G are Brisbane, Sydney, Melbourne, Adelaide, Perth, Canberra, Hobart, Launceston, the Gold Coast, Toowoomba, etc. In terms of download speed, the average 5G download speed in Australia is 215.7 Mbps.

The commercialization of 5G in Taiwan is very young. Far EasTone (FET) has launched commercial 5G across Taiwan’s metropolitan cities. Its radio access network (RAN) and 5G core technology are solely from Ericsson. As for its 5G speed, it is in the fourth position with an average 5G download speed of 210.2 Mbps.

Just like Taiwan, Canada’s 5G is only a few months old. Commercial 5G started in Canada this year. The spread of 5G in the North American country is still small but it is doing well. As of now, operators like Rogers, Bell, and Telus operate consumer 5G networks in Canada. Cities like Vancouver, Calgary, Edmonton, Toronto, Ottawa, and Montreal currently have 5G networks in some areas. Videotron 5G, Freedom Mobile 5G, SaskTel 5G, and other regional network operators should launch 5G deployment in 2021. In terms of its overall average download speed, Canada 5G hit 178.1 Mbps.

Commercial 5G services in Kuwait dates as far back as June 2019. However, 5G has been available in the Middle East country since 2018. When it comes to 5G download speed, this nation ranks sixth. According to OpenSignal, Kuwait’s average 5G download speed hits 171.5 Mbps.

Switzerland is among the first countries to begin deploying commercial 5G in 2019. However, due to health fears over radiation from the 5G antennas, there has been a slow down in the deployment. Switzerland has hundreds of 5G antennas in the country, making it one of the world’s 5G pioneers. All three major Swiss telecom operators – Salt, Sunrise and Swisscom will cover the country’s 5G. For its 5G download speed, it hits 150.7 Mbps on average

Just like Taiwan and Canada, Hong Kong’s 5G is relatively young and only became active this year. On April 1st, 2020, HKT, Hutchison 3, and China Mobile Hong Kong (CMHK) launched 5G services. For CMHK, its 5G services are available in over 90% of the main areas of Hong Kong Island. However, the HTK 5G network only covers 11 of the 18 districts in the territory. As for its 5G download speed, though new, Hong Kong’s 5G download speed hit 142.8 Mbps.

5G services are currently available in more than 1,000 towns and an estimate of 40 million Germans already use the 5G network. Major cities like Berlin, Hamburg, Munich, Cologne, and Frankfurt already have widespread 5G services. However, in terms of 5G download speed, Germany’s 5G is in the tenth position globally with an average speed of 102.0 Mbps.

Others – the Netherlands and the U.S.

The modest 5G Download Speeds in the U.S. are due to a combination of the limited amount of new mid-band 5G spectrum that is available and the popularity of low-band spectrum – T-Mobile’s 600MHz and AT&T’s 850MHz – which offer excellent availability and reach but lower average speeds than the 3.5GHz mid-band spectrum used as the main 5G band in every country outside of the U.S. However, Verizon’s mmWave-based 5G service offers considerably faster average 5G Download Speeds of 494. 7 Mbps. This is faster than even that of Saudi Arabia.