Taiwanese chip maker, MediaTek, has been on top of its game with its new Dimensity series. The performance of its Dimensity series is quite good and it has a lot of orders from OEMs. However, when it comes to top/flagship performance, it appears to still be in the shadows of Qualcomm. With the ban on Huawei which stopped the Chinese manufacturer from doing business with TSMC, MediaTek was the go-to company. However, a further explanation of the restrictions shows that even MediaTek can not do business with Huawei. 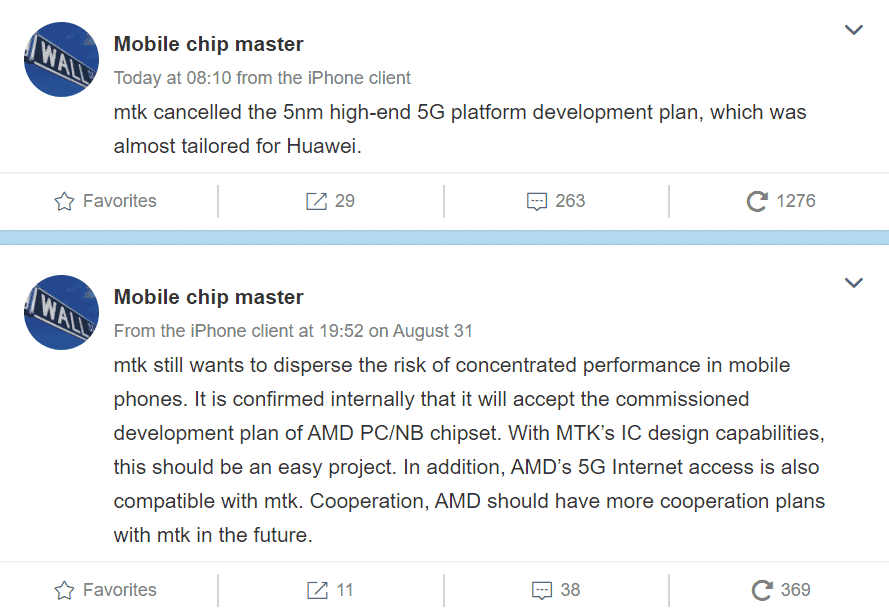 However, MediaTek still wants to diversify the risk of focusing on mobile phones. The Taiwanese chipmaker internally confirms that it will accept the commissioned development plan of AMD PC/NB chipset. With MediaTek’s IC design capabilities, this should be an easy project, plus AMD 5G Internet is also in cooperation with MediaTek. AMD should have more cooperation plans with MediaTek in the future.

MediaTek recently applied to the US in accordance with the regulations. Its application seeks to continue to supply Huawei after September 15. However, we all know that the best it can do is apply. It will probably not get a response and if it does get one, it will probably be an echoing negative.

Amongst MediaTek’s latest Dimensity series, the Dimensity 1000+ is its flagship product. This chip uses a 7nm manufacturing process so it is still behind the 5nm process. MediaTek’s next-generation 5G flagship smartphone processor is expected to arrive in the second quarter of next year. There are speculations that it will be the Dimensity 2000 which will use the new 5nm manufacturing process.

However, there are reports that MediaTek’s 5G chip stock for Huawei is about 30 million sets. What happens to these chips now that Huawei can no longer use them? MediaTek can now rely on other Chinese manufacturers like Xiaomi, Oppo, and Vivo. If MediaTek cannot deliver the 30 million sets to the likes of Xiaomi, OPPO, and Vivo, it may face considerable losses.

Next Google Sabrina: Android TV dongle will cost $49 only